The Dead Chihuahua Sketch Remember the Monty Python "Dead Parrot" Sketch? The one where John Cleese pounds the stiff deceased bird on the pet shop counter? "Hello Polly!!!!! Wakey, Wakey!!!! I've got a lovely fresh cuttle fish for you!" 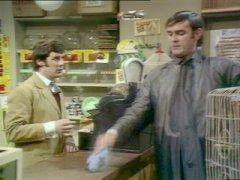 Well here's story almost as funny but it's true. A woman in Missouri attacked a dog breeder with a stiff deceased dog!

"A woman angry that her new puppy had died pushed her way into a dog breeder's home and repeatedly hit her on the head with the dead Chihuahua, authorities said.

The 33-year-old woman told police she had taken the puppy to a veterinarian, who said it was only 4 weeks old and needed to be returned to its mother. But before she could return the puppy, it died.

Early Wednesday, the woman went to the breeder's home, pushed her way inside and began fighting with the breeder as she tried to make her way to the basement to get another puppy, police said.

The breeder wrestled the woman out of her house to the front porch, where the woman then hit the breeder over the head numerous times with the dead puppy, the St. Louis Post-Dispatch reported, citing police.

As the woman drove away, she waved the dead puppy out of the car's sunroof and yelled threats at the breeder, police said. She later called the breeder and threatened her and her family, according to court records."

Well this one definitely qualifies for my weekly Friday WTF? award.

1 That's a very sad story. That dog "breeder" needs to learn a little more about dogs.