It's Time For Friday "WTF?" And this one is a doozy. A family in Quebec is distraught over their deceased mother, but moreso than normal. It seems her head is missing.

"The family was preparing to bury the 68-year-old woman when they got a call from the funeral home in Boucherville.

Someone had broken in and mutilated the body, leaving it behind with no head."

I mean, what kind of sick sumbitch does something like this? This is not the only time I've heard of this, though. What possible reason could someone have for stealing a dead person's head, you ask? Check out this story from almost exactly a year ago.

Would You Let This Guy Grab Your Hooters? 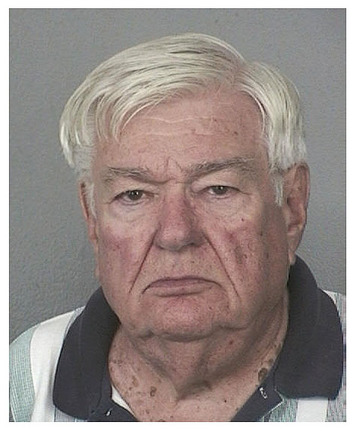 Now this is where the story stops being amusing. According to the police report, after Winikoff finished fondling these women's boobs he proceeded to put his hands down their pants and assault them digitally. Winikoff was arrested for sexual battery.

I mean, WTF ladies? Look at this guy? What are you thinking letting a stranger into your house to essentially feel you up?

Americans are by and large a fairly trusting people. Our culture, the most diverse in the world, is based on the idea of giving people the benefit of the doubt. Our legal system is founded on the principle of innocent until proven guilty. That's what makes it so hard for the U.S. to deal with terrorism, which uses our own trusting nature against us.

But this is just.plain.stupid. I feel badly for the victims but you really have to wonder what was going through their minds - if anything.

1 Makes me think of the case a year or so ago when some guy was giving exams to women in a converted storage shelter. The big "Self-Storage" sign should have been their clue that not all was on the up-and-up. A little skepticism goes a long way in keeping the creeps away!

"Monster" Bunny Update Last week, I posted about a story of a giant "were-rabbit" gorging itself on people's gardens in rural England.

Well, they caught the bugger. And here he is:

Now I got you! You wascally wabbit!

2 Actually, the way they catch these buggers is they marry them off to huge female rabbits.

Curse Of The Real-Life "Were-Rabbit"? A monster bunny rabbit is gorging itself on vegetables in Britain!

Jeff Smith, 63, was first to spot the black and brown creature at the Mouldshaugh Lane allotments in Felton, Northumberland, two months ago.

According to The Sun he said: "It was massive. I thought, 'What the hell is that?' It's no ordinary rabbit - we're dealing with a monster.

"Its prints are huge, bigger than a hare - about the size of a deer's. One ear's bigger than the other. It's a brute.

Marksman Brian Cadman, an assistant gamekeeper on patrol, added: "We've been told to shoot on sight."

Is this possible? You betcha. Just get a load of the size of one below the fold!