A 52-year-old man who complained that he felt sick after riding a roller coaster at Busch Gardens died about two hours later in a hospital, park officials said Tuesday.

When the President was asked about the story, he is reported to have said, "I don't anything about that."

1 Some believe that a massive cover-up is in play as the Bush White House begins shifting blame from it's own inner circle to those innocent children enjoying a days recreation. The Bush White House declined comment. Senator Hilary Clinton, named for the intrepid explorer who tamed Mount Everest a few years after her birth, opined that "Such tactics are common in this administration. When we democrats take back the White House we'll show the American people what it's like to have their taxes raised and...I mean, what it's like to surrender to the enemy...I mean, what it's like to subvert the US Constituition to International whimsy...I mean..." Her head exploded shortly afterward. Film at 11. Dan Patterson Arrogant Infidel

Now That's Some Nice Wool - It's Friday WTF? Polish grannies are putting their crocheting skills to a new use - making G strings!

No longer able to sell their hand-crafted doilies and table clothes, women in the tiny Polish mountain village of Koniakow turned their crocheting skills to making sexy lingerie.

And the business has proved such a success that the crochetiers have now launched an online shop for people around the world to buy the knitted underwear.

Tadeusz Rucki, who funds the granny g-string firm, said: "People aren't only mad about g-strings in traditional white crochet, but also in red and black."

But the head of the local Society for Folk Art, Helena Kamieniarz, is not happy with the new business, saying: "What is being done to our old traditions is a disgrace. The art of crochet is not intended for making such garments." 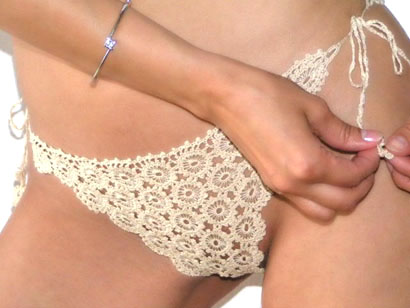 What would my dear old Nanna say?

1 :shock: I found this pic on a search under "crochet". The lace looks nice, the girl is devoid of _____ ____ & they don't pay crochet artists enough to make a living at selling table cloths or doilies, but these gals are making money at selling lace using ___ to promote their art. What else do we expect them to do?

After all, at least they're not on Welfare!

When A Hard Good Man Is Good Hard To Find There's always mother nature to answer the call of the wild:

Interesting Photo Of The Day 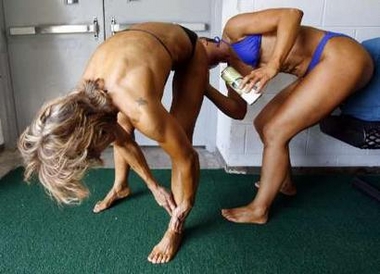 The caption to this Reuters pic reads:

Umm. I think somebody needs to explain to Ms. Brennan that applying the tanner internally amounts to overkill.

2 No need to worry. Look a bit closer at the label- that's colon tanner.

There's Only Two Things I Hate In This World... "...People who are intolerant of other people's cultures. And the Dutch."

Seriously, though. Apparently, there is a political party in the Netherlands dedicated to the passage of a law that lowers the age of sexual consent from 16 to 12.

A judge recently overturned a ban on this "political party" which is headed up by some pervert who molested an 11-year old boy. It's called the PNVD party (an acronym for "Brotherly Love, Freedom and Diversity" - yech). This is really nothing more than an out-and-about version of the Super Adventure Club from South Park.

The judge's rationale was that it was up to the voters to decide the appeal of such a group. Fine, I agree in principle. But hear me now and believe me later; if this group of sickos gets more than 2% of the vote in the next Dutch election, I am taking old Nigel's declaration to heart.

Just How "Gay" Is Soccer? Just head on over to AgentBedHead.com.