A little to "personal" for my tastes. Do they issue penalties for giving wedgies or is this just a cultural thing and I don't get it?

Do you think the guy even considered running around his opponent or was "straight through his crotch" his first instinct?

1 Imagine if the fellow in the blue shorts was facing the other direction!

2 Hey Gary. Trackbacks appear to be "fruitcaked" over the weekend and continuing, so I wanted you to know that I did a "gay soccer" post that you might find amusing.

Turn on a World Cup game, and within 15 minutes you'll see a grown man fall to the ground, clutch his leg and writhe in agony after being tapped on the shoulder by an opposing player. Soccer players do this routinely in an attempt to get the referees to call foul. If the ref doesn't immediately bite, the player gets up and moves along.

Making a show of your physical vulnerability runs counter to every impulse in American sports. And pretending to be hurt simply compounds the outrage. Basketball has floppers, but the players who do it--like Bill Laimbeer, whose flopping skills helped the Detroit Pistons win two NBA championships--are widely vilified and, in any case, they're pretending to be fouled; they never pretend to be injured. When baseball players are hit by a pitch, the code of conduct dictates that they can walk it off, if they must, but by no means may they rub the point of impact. And pretending you're hurt? There's not even a rule against that--every red-blooded American baseball cheater knows nobody would ever do that.

Is it machismo? Is it stoicism? Are we suppressing the little girl inside all of us? Perhaps. But faking an injury to gain an advantage is just so...wussy.

Not to mention that a scroll through the most recent posts at "Caption This?" doesn't exactly reinforce a "manly" image of the sport.

1 In US sports, there are only wusses :-) They fear aproaching the court w/o halmets and 100lb of other protective devices and 10-inch thick air sneakers. Guys even cheat by measuring their height with sneakers on.

2 I can only assume your references to helmets and protective gear are directed at American Football. Yeah, I can see how participants of such a full-contact sport would be "wussy" for not wanting to suffer severe head trauma or full paralysis.

What's the worse that can happen in soccer? Somebody accidentally kicks you in the nuts? "Guys even cheat by measuring their height with sneakers on." And this comment makes zero sense. What American sport has a minimum height requirement?

And In Other Sports News... Somebody pinch me! The best record in the National League, and second best overall behind Detroit!

Over that last three months I've seen something in this team that transcends the talents of the individual players. And that is chemistry. It was chemistry that made all of those Yankee teams from 1995-2004 so dominant.

How far will it take these guys? It's too early to say, but it's going to be a fun playoff season. You can bet on that.

Isn't It Cute? The way the rest of the world gets all jacked up for this World Cup thing? 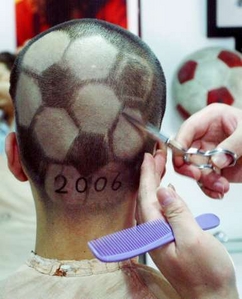 You'd think this was life and death or something.