The Man With The Golden Arm Yee-Gads! The SanFran Giants have succumbed to the will of the wily "super agent" Scott Boras and agreed to pay pitcher Barry Zito $126,000,000 over SEVEN years! 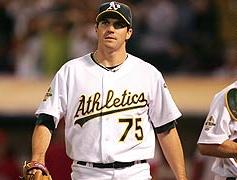 Now, as a Mets fan, I would certainly have considered Zito a nice signing in New York but laying out a contract for a pitcher that goes beyond five years is insanity - a guaranteed $18 Million a year from now through 2013? No thanks. Boras strikes again. Wow. And he doesn't even have to move (he's currently on Oakland's roster).

Sure, maybe he'll pitch at "ace" levels until he's 35. Maybe he'll avoid throwing out his arm. And maybe if his production starts to fall over the years, there'll actually be a team out there willing to trade for him and take on his gi-normous salary.

But if I were a betting man...nah.

Tom Returns To Mets This news is a little stale but as a Mets fan I wanted to weigh in on it. I'm really happy Glavine will be coming back to New York for what will likely be his last year in MLB. Just ten wins away from number 300, he's considered his options (in the context of his family who lives in Atlanta) and will be taking the mound for the Mets come April.

Not only is Glavine a solid arm in the rotation but I've always liked him, even when he was striking out Mets as a member of the Braves. Some fans hold a bit of a grudge against him because of his role with the player's union and the strike of '94 but Glavine has always been a class act. The head office in Flushing entered into a gentleman's agreement with the future Hall-of-Famer last year when they renegotiated his contract (something Glavine was not obliged to do), in which both parties would not act on their respective off-season options in order that Glavine could consider an opportunity to sign with Atlanta, if there was one.

The Mets had asked Glavine to give them a definitive answer before the start of the winter meetings in Orlando so they'd know whether or not they needed to pull the trigger on a deal for his replacement. Glavine could have reneged and waited for Atlanta to clear some salary, but he acted in good faith with the Mets and re-signed last Friday.

The strain caused by Tom's separation from his kids during the school-year portion of the MLB season has been tough. As a father, I can completely sympathize. And if the team had just given him some more run support a couple of years ago, he may very well have already hit his 300-win goal which is his stated trigger for retirement. It's extremely likely that number 300 will occur sometime this summer and it'll be nice for him to hit it as a Met, making his years here in New York that much more meaningful.

Welcome back, Tom. We would have missed ya.