STEVE IRWIN, who has died during underwater filming aged 44 after a stingray barb pierced his heart, was known through his documentaries on the cable TV channel Animal Planet to some 500 million people in more than 120 countries. As the exuberant, golden-haired, khaki-wearing and apparently fearless Crocodile Hunter, he got very close to Â— and even wrestled Â— numerous apex predators. His unscripted narration was punctuated with Â“Crikey!Â” and Â“ Look at this beauty!Â” Many called him a thrill seeker, but he called himself a wildlife warrior. He was in fact a highly knowledgeable natural historian, whose mission was to educate people by enthusing them. Â“If you canÂ’t get wilds into peopleÂ’s heartsÂ”, he said, Â“then we havenÂ’t got a hope in heck of saving them Â— because people donÂ’t want to save something they donÂ’t know.Â” 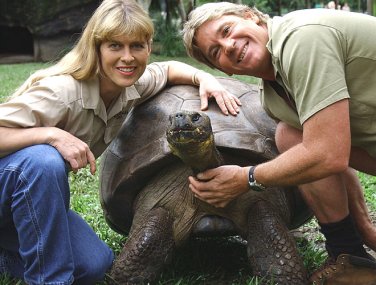 Irwin owned land in Australia, Vanuatu, Fiji and the US. He was a fan of Essendon in the Australian Football League, and loved mixed martial arts competitions. He supported the conservative Liberal Party, and once described the Prime Minister, John Howard, as the Â“greatest leader in the entire worldÂ”. Howard returned the favour on hearing of IrwinÂ’s death, calling him Â“the genuine article . . . he took risks, he enjoyed life, but he brought immense joy to millions of people, particularly to childrenÂ”. Among IrwinÂ’s legacies is Elseya irwini, a new type of snapping turtle he discovered on the coast of Queensland. He was named Tourism Export of the Year in 2004.

1 He will certainly be well-remembered. An amazing man, he seemed to live on the edge of danger, but knew exactly what he was doing. I'm curious as to the specifics, though. Was it a "freak accident", or was he again, tempting fate?

2 Also nice to know that he supported John Howard!

3 You know I wasn't passing by THAT bit of info on Steve. Irwin's death was a tragic accident - of all the places that stingray could have struck...Steve died doing what he loved best in the world, outside of his family. You know I used to swim with Atlantic Stingrays - and on occasion - petted them. Did the same with the Sandtigers and Brown sharks. It seems like a lifetime ago...

4 Steve Irwin was, as the Aussies say, true-blue. This accident is so very tradgic. Especially since he could have survived had he not done a very human thing - he pulled out the spike. It ripped a larger hole and allowed excessive bleeding from the heart. Leaving the spike in place was sealing the puncture. One last horrible lesson from Steve to us all: leave the punturing object in place for medicos to remove. Never remove the object yourself.