Jessica Simpson Does The Right Thing The head-turning actress was invited to attend a gala fundraiser for the National Republican Congressional Committee but she, regretfully, declined.

The blond star of the film "The Dukes of Hazzard" still plans to visit Washington on Thursday to lobby members of Congress on behalf of Operation Smile, a non-profit venture offering free plastic surgery for disadvantaged children overseas with facial deformities.

People close to Simpson said she declined a request to appear that same evening at the gala fund-raiser of the National Republican Congressional Committee -- even after she was offered some private face time with Bush -- because Operation Smile is a non-partisan group.

"It just feels wrong," one Simpson insider told Reuters on Wednesday, adding that the actress keeps her political views private. "She would love to meet the president and talk about Operation Smile ... but she can't do it at a fund-raiser for the Republican Party."

Conservatives like myself are often quick to complain when Left-wing actors use their celebrity to promote the Democrat Party. Let's be consistent here. In my opinion, Simpson used something in this situation that you don't see very often in Hollywood: good judgment.

Promoting a worthy cause like Operation Smile is commendable. And identifying with one party of the other isn't a big deal. But when a celebrity is out their shilling for their party of choice, that's just tacky. We expect entertainment out of these folks, not preaching.

And, honestly, just appearing at a party fundraiser doesn't even come close to the kind of in-your-face political shenanigans that so many Liberal celebrities engage in. But Simpson didn't want to potentially taint the non-partisan nature of the cause she is supporting. Good for her.

1 Good post, Gary. I thought the press I read about this was pretty strange as well. Oh - I thought I'd point you to this: http://news.yahoo.com/photo/060317/482/dchg11003170254;_ylt=ApypEq_jRaj82viSpHVCFPJPXLoF;_ylu=X3oDMTBia2Jza2VjBHNlYwNnYWxsZXJ5 Obviously Jessica is a rarity.

Sharon Stone Naked In Four Weeks If that post title doesn't spark your interest, nothing will.

But it's true. Sharon Stone has confirmed that she does in fact appear nude in "Basic Instinct 2" which opens March 31.

Now, this should be interesting because Stone, 48 years young, is not quite the hot siren we saw in the original "Basic Instinct" of fourteen years ago (go watch the Quicktime trailer at Apple.com and see for yourself). I don't mean to say she looks bad or anything but will the prospect of seeing a more...ahem...mature Ms. Stone in her birthday suit be one of the major factors driving the box office numbers? Because from the preview the film looks awful.

Will the film get a candidate for Best Make-up? Or can Sharon still knock our socks off? We shall see.

1 As long as I don't have to see Michael Douglas' wrinkled ass in this one, it's ok.

And In The Event Of An Emergency... 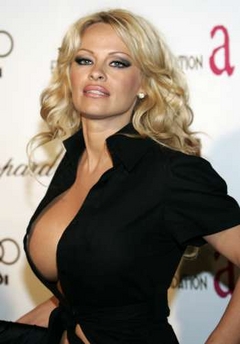 They can be used as a flotation device.

Someone Needs To Explain The Concept Of "Spellcheck" To Barbra Define irony.

Barbra Streisand makes the following list of spelling errors in one moonbat rant (a personal best):

And the rant in question mocks President Bush as a "C" student.