Ex-Donkey Visits Hippyland! Although the foliage seems to be a wee bit late this year, the colors were at least beginning to show during my trip to Southern Vermont on Friday and Saturday. But then, when you're staying at a place like this: 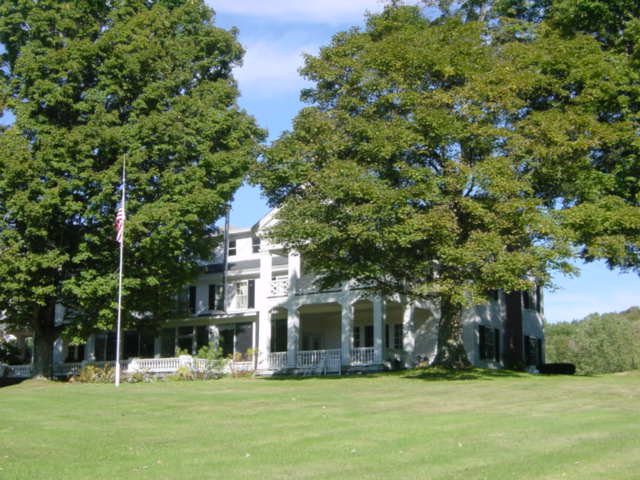 But the leaves weren't the only colors out. There were lots of "colorful" characters roaming the streets of Bennington this weekend. First let me emphasize that nowadays there are two Vermonts. There's "old Vermont", the people that speak with distinctive "Pepperidge Farm" New England drawls whose families have lived there for generations. These folks are pretty much the standard down-to-earth Yankees that tourists come to expect when they visit the Green Mountain State - very easy going and far from politically active.

Then there are the "Flatlanders". This is what the first group calls outsiders. And in recent years, these people have been part of what you might call a Flatlander invasion of sorts. They represent an influx of urban professional Liberals and aging ex-hippies who have flocked to this characteristically tolerant and individualistic State.

This is Howard Dean's Vermont. And the arrogant Dr. Dean is their king. Two years ago, Johah Goldberg took a look at this phenomenon in an article he wrote for National Review. I remember reading it in the October 13, 2003 issue of the On-Dead-Tree edition. Goldberg quotes Hal Goldman, a historian and lawyer who's studied Vermont:

Hundreds of thousands of highly educated, well-off people invaded a state with a unique culture and history. They seized control of its resources and institutions, demeaned and destroyed the indigenous values of its people, altered the landscape, and drove many of the natives from their homes as a result of their activities."

As a fellow New Englander, I really sympathize with the traditional Vermonters. I thought I had it bad in Connecticut. But the Leftist culture setting up shop in Vermont is so in-your-face and openly hostile to all things Conservative, Republican or related to George W. Bush, it must drive the natives mad on a daily basis.

I'll give you an example. You know how everywhere you look you see these magnetic yellow ribbons (or red, white & blue and other variations) and even some flags and other such patriotic symbols? Well, up there you're much more likely to see magnetic "peace" symbols. You know the footprint of the American chicken? This photo is a study in contrast: 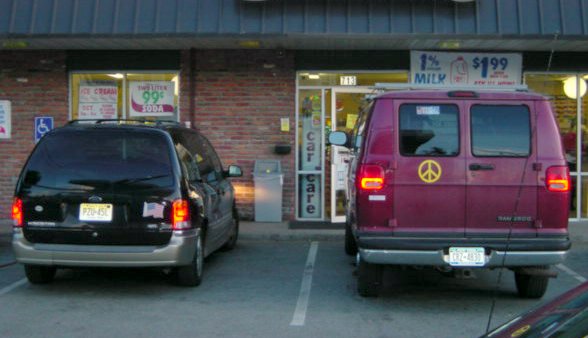 The first vehicle - a family mini-van - has the flag on the right of its rear. The other - the standard van - has the "peace" symbol on its left. Two Americas, eh? Incidentally, while the wife and I frequented many businesses in lovely downtown Bennington, any store that sold these "peace" magnets didn't get a dime of my business. Conversely, there was a nice little store on route 7, just South of the intersection with route 9, that sold lots of patriotic items where I spent well over $100.

But there's so much more! So many bumber stickers and car decorations that make you understand why Bush never comes to Vermont. Here's a bitter Democrat that still can't get over the last TWO elections: 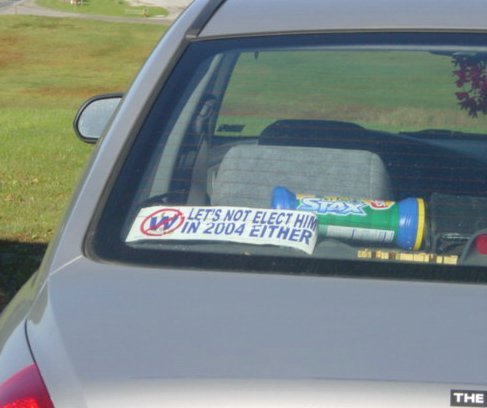 Hey, freedom of speech and all, whatever. But the election was almost a year ago. And it's not permanently affixed to the bumper, it's taped to the inside of the back window. So what's the point? Why not just toss it and "move on"? Because obviously it's a childish expression of frustration that Chimpy McBushitler is not legitimate in their opinion and "not their President". What a waste of mental energy to focus one's scorn on someone who isn't even running for office again...EVER.

And then, there were the "protests", if you can call them that. While driving in the center of Bennington on Saturday I saw some real live hippy moonbats: 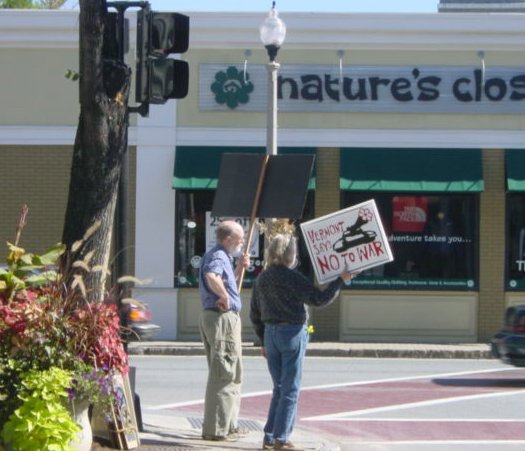 I turned the corner because we were heading North to see some covered bridges. I wanted to get more pictures but I figured I could get some on the return trip. I wasn't going to be long. Saw some lovely bridges like this: 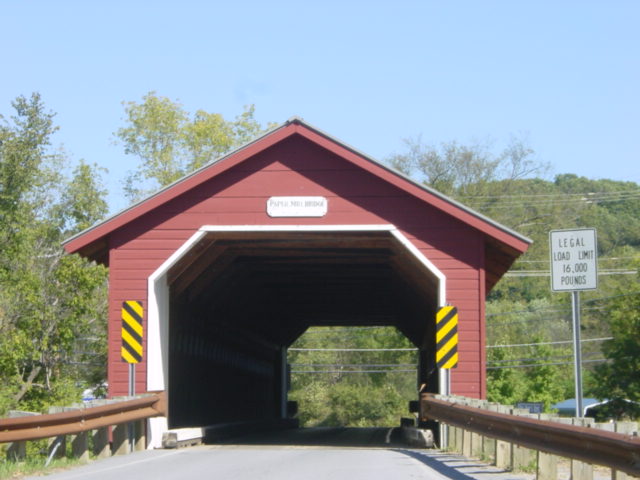 The only problem is when I returned - less than an hour later - all the hippies were gone. Of course, there hadn't been more than a dozen of them, so I figured they all headed down to the nearest cyber cafe so they could post nasty insults about Bush on DemocraticUnderground.com

This got me to thinking. Over the summer, I had occasion to drive through the center of Middletown, CT a couple of times and I remember seeing something similar. Very similar. I noticed that this "protest" and the two I witnessed in CT had a lot of things in common. They all took place on a Saturday during the noon hour. They all were located at an intersection that was considered the center of that particular town, with a couple of moonbats with signs on each of the four corners. The protesters were - for the most part - a bunch of aging hippies. And they looked very much like they were designed to appear spontaneous.

I'll bet if I took the time, I could find a "manual" for protesting on a MoveOn.org type site and these folks were following it to the letter. Anyway, I got a good chuckle over the whole thing.

Here's something interesting I found on my covered bridge drive: 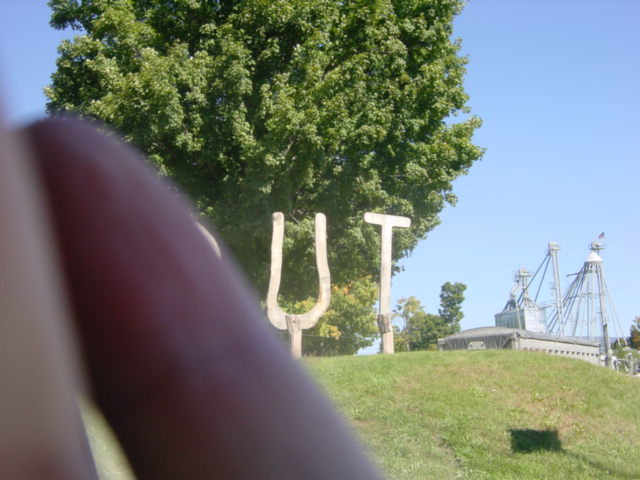 It's a wooden sculpture of sorts that spell O-U-T (of Iraq, get it?). Unfortunately my fat finger got in the way of the O. Inside the O was - you guessed it - a "peace" sign. Sorry you can't see it. Hey, what do ya want? I was stopped in the middle of the road for cryin' out loud.

There's lots more I could show you. But lastly I wanted to talk about the MooseFest. MooseFest? Yeah, you heard right. All over Bennington, there are these Moose statues decorated in lots of interesting ways. It's kind of neat to drive around and spot them. But in front of the Bennington Museum, I found my favorite: 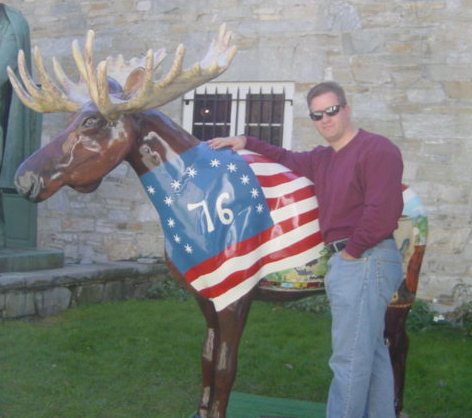 Notwithstanding all the Liberal freaks, Vermont is a beautiful State with a lot to offer visitors. If you get the opportunity, I highly recommend taking a trip there. You may even get a good laugh out of it!

A special thanks to the RightWingProf, who not only found the online version of Jonah Goldberg's article but directed me toward an excellent source of old articles for future reference!

2 There's a reason I won't buy Ben and Jerry's.

3 Interestingly both of the vehicles you show parked by the convenience store are from out of state.

4 This is true. I did notice it at the time. But while the flag van is from Joisey, the peacenik van is from New York, the border of which is less than ten miles away. So I at least consider that one to be somewhat "local".

5 Funny - the peace sign is the footprint of a chicken - that's good. This one is even funner: http://www.jabberwonk.com/flinker.cfm?cliid=769u8

6 Nice link. But tell me what's worse. A politician who never served in the military but supports them unconditionally in a time of war, particularly in the pursuit of protecting American citizens or a politician who DID serve in the military but turns his back on it when they need the support the most because they're beholden to a bunch of Left-Wing, America-hating Fruit Loops?

7 How do we go about applying for a grant to ear-tag and radio-collar the hippy protestors? 'Cause I don't think there are as many as it might seem, and study of their migratory patterns might prove illuminating.

8 Wonderful post even so , I was wanting to know if you could write a litte much more on this topic? I'lbe very thankful if you could elaborate a bit bit further. Bless you! outlet http://www.haiguinet.com/blog/index.php?p=206027