"San Francisco...where you will never find a more wretched hive of scum and villainy..." Over the weekend, I was in downtown Little Tokyo, for Nisei Week. I think I must have missed out on the weekend protests, as I've been checking out Zombie's photos from the San Francisco anti-U.S./Israel rally.

I should have known that something was going on, as a couple of people walked by my booth with placards. I tried to catch up to them, to find out what their signs said, but it was crowded and I had to return back to my booth. I suspect there must have been a San Francisco equivalent going on by city hall, which is only blocks away from Little Tokyo.

I did manage to get a couple of photos of Japanese-American war veterans in the parade: 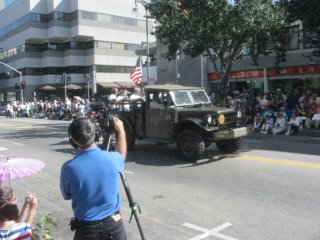 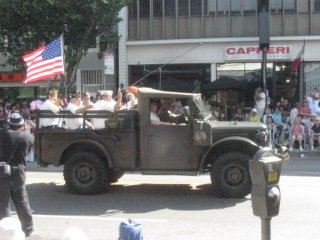 Instead of republishing some of the vile photographs of the leftie-lunatics this time around, I'll just provide you with the link. Although, this one seriously made me chuckle: 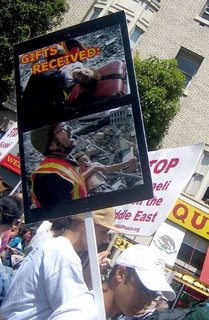 I wonder if the sign-holder is aware?

As Laura Ingraham said on her radio program yesterday morning, political ads should be made of these fringe-fanatics, come election time. Showing them off to middle America, and knowing which political party these nutters are more closely aligned to, can only be good for the Republican Party.

The pro-Israel counter-protestors, however, is a thing of beauty, and I have no problem, viewing and publishing these: 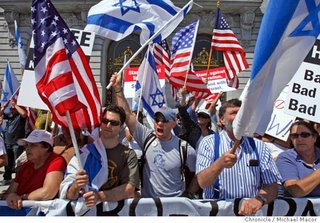 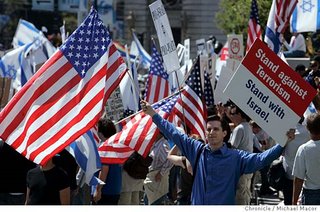 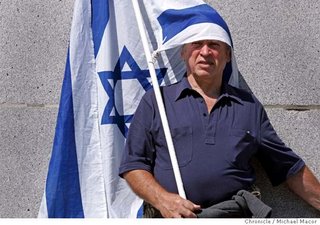 As AirForceWife put it, in a previous comment thread, in order for there to be peace, both sides have to want it. Israel has ached for peace...so much so, that with the help of President Clinton, 97% of the West Bank and 3% of Israeli land was brokered on behalf of peace. But Palestinians and the Arab world have not wanted peace with Israel: they have ached for Israel's destruction.

Tell me of an instance when Israelis have marched and chanted, "Death to Palestinians!" , "Death to Muslims!". Yet in the Islamic States, we have heard it so often from those practitioners of "the religion of peace", that we have grown desensitized to it. And the pro-Palestinian/anti-Israel Left excuse their behavior. Instead of recognizing the hatred of radical-Islamists (which infects even mainstream Muslims) as a source of the world's woes, they'd rather blame the U.S. and Israel for the evil conduct of others. After all, they can do this with the security of knowing we won't behead them for it. Criticizing Islamists, however, might get you killed. God forbid, we should be "creating more terrorists" by standing up to terrorism. 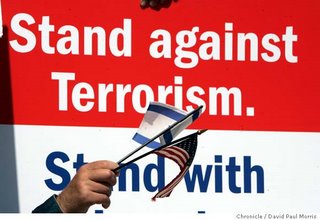 Have Bumpersticker, will Drive One of the things that I find most scenic during my drives through the "mean streets" of Los Angeles, are all the whacked out bumperstickers on the road. The Kerry/Edwards bumperstickers especially warm the cockles of my heart. 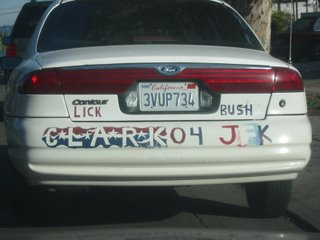 I took this photo back in February of this year. Hullo! Earth to moonbat! 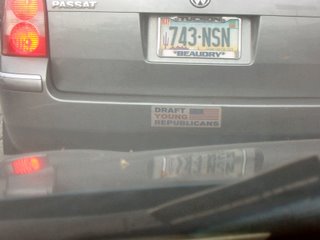 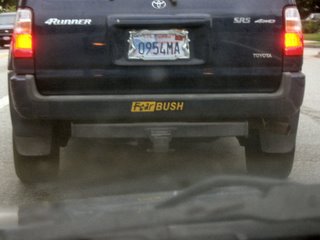 Hmm....must be a message to the Islamo-fascists out there in the wide world. That's right you terror-Nazis: FEAR BUSH! 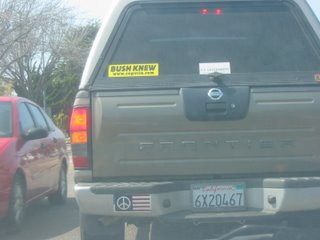 The driver was going so fast, I couldn't catch up to him to make sure that he had buckled on his tinfoil hat as he sat behind the wheel....moving through life so recklessly. 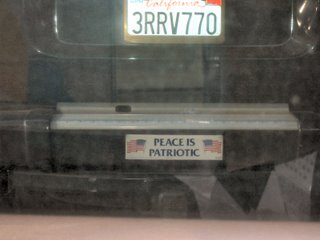 Of course it is! Which is why we went to war. 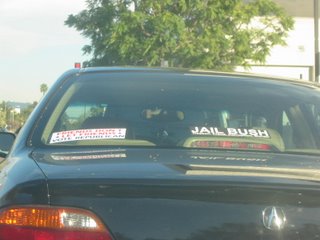 This past Tuesday, I finally "came out of the closet" and told a very liberal client of mine that I was....*gasp*...a CONSERVATIVE REPUBLICAN and a strong supporter of President Bush. I love this gal, and to my relief, like a true, sane liberal, she still accepted and loved me for who I am. She had a bumpersticker that said "No blood for oil". I think she now owns a hybrid. 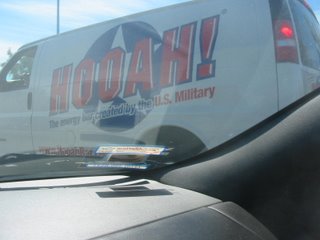 Where do I get one of these energy bars? 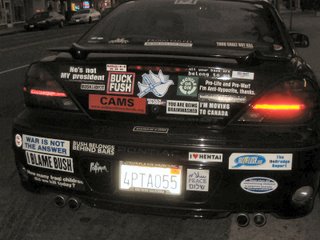 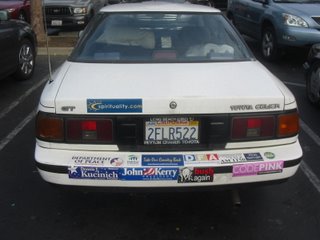 These last two are examples of liberal moonbatmobile. I found the first one above parked alongside the road, around the block from where I live. Why would one deface one's personal property like this? Click it to enlarge. Notice the one that says "I'm moving to Canada"? I wish I had a post-it response to tag the vehicle with, "then why are you still here?".

I posted this video before, under my old YouTube account. I won't do that again; but through Livedigital, I bring you back this clip from Malcolm in the Middle. What made it hilarious for me, was the bumpersticker, "War is not the Answer". I can actually see the liberals who are deranged Bush-haters, resorting to violence to get their message of peace across.

Enjoy the weekend video, and drive safe. If you see any Kerry/Edwards bumperstickers out on the road, don't roll your eyes and fret; we won! Just point, honk, and laugh as you drive by.

Kos To Senate Dems: Kneel Before Zod! Markos Moulitsas Zuniga (aka "Kos"), the Grand Poobah of the nutroots, has issued his latest decree to Joe Lieberman's Democrat colleagues:

Here's what we all need to do the next few days:

1. Push Harry Reid to strip Lieberman of all committee assignments.

2. Let people know what a sore loser Lieberman is.

3. Get all Democrats -- including Bill Clinton -- to publicly back Ned Lamont.

4. Get the Democratic interest groups who backed Lieberman to switch allegiances in the general.

The DSCC and the DCCC will have to deal with the fact that this race will continue to suck oxygen from great pickup opportunities. And I won't apologize for that, because as a proud Democrat, I will help in whatever way I can the Democratic nominee from the Great State of Connecticut.

Translation: You have your marching orders! You will all help me squander any and all electoral opportunities for this November or be destroyed.

Can this get any better? The DSCC and DCCC must kiss Kos' ring and pay homage to the new king? Watching who among the party leadership will submit will be more fun than any Republican could have hoped for this fall.

LGF has the link and the picture that I don't care to replicate.

Honest to God, do you think you'll hear one peep of outrage from Al Sharpton or Jessee Jackson - who will be campaigning for Lieberman's opponent, Ned Lamont, this week?

Or perhaps Mr. Lamont would take time out of his schedule to condemn the image?