An Ode To Cindy Pam Meister has penned (or typed, rather) a poem for the oh so controversial - not- Cindy Sheehan. 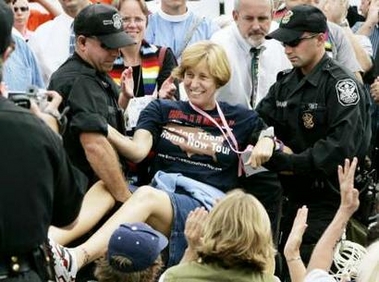 Cindy Gets Herself Arrested Cindy Sheehan's D.C. protest is so pathetic that she's had to go get herself arrested in order to get press coverage.

Sheehan and several dozen other protesters sat down on the sidewalk after marching along the pedestrian walkway on Pennsylvania Avenue. Police warned them three times that they were breaking the law by failing to move along, then began making arrests.

Sheehan, 48, was the first taken into custody. She stood up and was led to a police vehicle while protesters chanted, "The whole world is watching."

Several dozen others? Don't they mean like, maybe,...two dozen? Yesterday it was about thirty people and you gotta figure at least a few have real jobs to go to today.

This is becoming such a joke, it's almost uncomfortable to watch. I hope it lasts!

1 I say send her and her sycophants to that 'boot camp in the desert' run by that Sherriff in AZ.

"The whole world is watching." Helloooooo aging hippy freaks, it's not 1968! This is not Chicago! We should start a "people we'd like to slap" feature...

3 I think I saw a picture of her smiling as she was taken by the police. She must feel like a martyr and her "demented dozens" following her around like sycophant apostles.

Two's Company, Thirty Is A "Crowd"

At least that's what the A/P considers a crowd. Because that's all the America-hating moonbats that Cindy Sheehan could muster for her march on the White House this weekend.

H/Ts to: Confederate Yankee, Powerline, and BullDogPundit (who makes the observation: "there were more people at my flag football game this weekend") 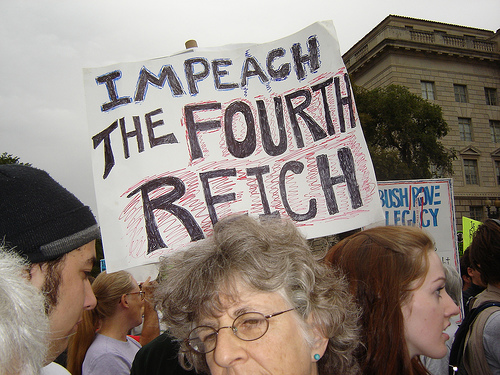 Michelle Malkin has this gem and many more in her Flickr album of this weekend's protests in D.C.

What a freak show.

1 I love moonbat signs and slogans. They make me point and laugh. I was at the Los Angeles rally by pure chance, and took some pix.

The Usual Suspects What's the biggest difference between those who protested during Vietnam and the caravan of loony-toons following Cindy Sheehan around protesting about Iraq?

Simple: Thirty-five years ago, there was a groundswell of opposition to the war made up of individuals who, however naive and misguided, were reflecting a genuine feeling in the country at the time. Today, this motley road show of media hounds is comprised of professional protesters. Opposition to this war, is mostly a reflection of various kook organizations trying to push their Left-wing anti-American agenda.

Betsy Newmark shines the spotlight on these familiar names and faces who always manage to show up whenever there's an opportunity to perform for the cameras - and hatred of America is their primary motivation.

Cindy's Magic Psychedelic Bus Tour NRO's Byron York reports on Cindy Sheehan's cross-country protest, which is manned by nothing more than a handful of aging hippies and professional protesters.

Don't these people have actual jobs?

Pathetic, yet hilarious. My favorite part is when the RV backs over the Vespa. Like...bummer, man.

1 :shock: So this is where all that Social Security money goes!

Jeez, Those Dems Are A Nasty Bunch The fellas over at Dog Snot Diaries have been poking their sticks at the Lefty blogs and stirred up a hornets nest on the topic of Michelle Malkin. Really vile stuff.

What is it with these Democrats these days? I swear, if I woke up everyday so full of bile and rage, I think I'd probably kill myself. Go check out these mean old meanies here.

Intoxicated By Her Own Notoriety, Cindy Turns Her Guns On Hillary Not content be an obsure footnote in history, Cindy Sheehan has turned the pressure up on the NY Senator to appease the anti-war Left.

War protester Cindy Sheehan came to New York last night with a blunt warning for Senator Clinton: End your support for the war in Iraq or else.

Visiting New York City for the first time since leaving her campsite outside President Bush's vacation ranch in Crawford, Texas, Ms. Sheehan told a packed audience in a Brooklyn church that Mrs. Clinton "knows the war is a lie" but because of her political ambitions refuses to voice any opposition.

This will definitely put a crimp in Hillary's current foreign policy kabuki-dance aimed at fooling enough moderate voters into thinking she can be trusted with America's security. The Kos crowd is watching closely, as are the MoveOn.org and Soros-funded "America Coming Together" groups.

Will Sheehan demand a "sit-down" with Sen. Clinton as well? Only if the journalists are there. And they have to much of an interest in her success to do that.

Gore: Bush Knew! (About Katrina!)... Crazy old Uncle Al is at it again. In a speech to the Sierra Club in San Fran, he not only blames Bush for the aftermath of Katrina but implies that, because of Global Warming, the President knew just how bad it would be:

Bush administration officials have said Katrina's damage could not have been anticipated, but Gore rejected that.

"What happened was not only knowable, it was known in advance, in great and painstaking detail. They did tabletop planning exercises. They identified exactly what the scientific evidence showed would take place," Gore said.

Implicit in this charge is that the extent of the damage could have somehow been prevented - and that the administration did nothing about it.

Clearly the former Vice-President is off his meds again. So Al, how's your multi-million dollar public access channel doing these days?

1 god, am i getting sick of THAT clown. it's bad enough that he just can't grasp loosing the election from what seems like aeons ago, but he's still making these outrageous claims to this date (remember, when he "invented" the internet in the early 90s?) global warming is bad, very much so, but hurricanes majorly pre-date the roughly 120 years since we launched an ecological assault on our planet at the inception of the industrial revolution. now i am a HARSH critic of the bush administration's environmental policy (or their total lack of one, to be more precise) but i can't figure HOW that is the fault of global warming. these little political jabs are just a pathetic attempt to keep gore's name in the news and that is wrong. f**k him! what a weasel. now, to get to my criticisms. since we knew about it in advance, and ANYONE with a tv and a set of ears knew it was a predicted catagory 5, preparations should have been better devised. the response after the fact was pathetic, and old arabian horse-loving brown was right to retire as his ineptness cost MANY, MANY people their lives. no one can precisely predict what a hurricane will do, but if i can see how bad it is from my living room in PA, then what the heck took the gov't so long to get it together. and why didn't they just fire brown from the get go? he screwed up, bush knew it, and there should be no reason why people in public service can majorly f-up and not be held accountable - NO REASON! i find the blame shifting and wagon-circling from the right just as disgraceful as the "politicize-everything" tactics of the left. accountability is the name of this game, and it's just not happening.

How the "Patriots" on the Left Commemorated 9/11... BullDogPundit did a check of the Lefty Blogosphere to see how the kind of folks that reflexively bitch about having their patriotism questioned honored the fallen.

The result was not pretty, when it was there at all.

1 How dare we question their patriotism!!!

New MoveOn.org Ad Would Be Funny If It Weren't So Sad... A new anti-John Roberts ad featuring images of Katrina's aftermath, is being released by (WeJustCan't)MoveOn.org.

What exactly is the connection? That's what most people will wonder. But the organization insists that this association is justified.

The ad suggests that the plight of the mostly African-American evacuees in New Orleans showed that poverty remains a serious problem among minorities, said Ben Brandzel, the group's advocacy director. In a mix of judicial and racial politics, the ad then suggests that minorities could suffer if the Senate confirms Roberts.

"The connection is obvious," Brandzel said. "The images after Hurricane Katrina show we still live in a society where significant racial inequities exist. We believe John Roberts' record on civil rights ... is clearly not the direction our country needs to head now."

What exactly is it about John Roberts that makes his record on civil rights so objectionable?

Duh, he's a white male of course! And he's a Conservative! And Bush picked him! He must be against civil rights...right?

The only thing worse than the slanderous insinuation that Roberts is a racist - based on absolutely nothing but MoveOn's hatred of Bush - is the disgusting exploitation of this terrible tragedy for their pathetic political agenda.

If the whole subject matter wasn't so sad, this could actually be fodder for a Saturday Night Live skit. Keep it up guys. That loud snapping sound you hear is called a backlash - and it's coming back at ya.

1 Not much infuriates me anymore from the Left. Stuff like this just makes me grin and realize that they just don't get it and keep digging a bigger hole for themselves. Moveon.org, Cindy Sheehan, Jesse Jackson...all are good for Republicans and bad for Democrats. They make us look good.

2 Interesting the different ways that people react to the same situation. Katrina changed the way i see Black people in general.(see my blog post of today) For some it only gave then fodder for fueling their attacks on Bush. Too bad they couldn't take something positive away from an already tragic circimstance.

"Bruce Gagnon of Maine Veterans for Peace says Cindy Sheehan will be the featured guest at a protest outside the Brunswick Naval Air Station on September tenth."

Oh, and she's also saying that she plans to spend every August in Crawford doing the same schtick. Lovely.

hat tips to: Best of the Web and Drudge

2 These people are trying so hard to turn me into a Republican...it just might be working.