Inspirational Poster Of The Week 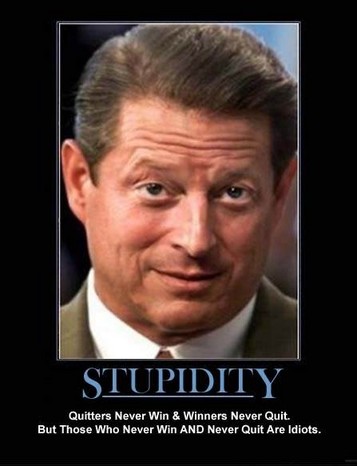 UPDATE, 4:30PM:
It occured to me that there might be someone out there who would comment that Al Gore won in 1992 and 1996. To this I would respond by saying that to designate Al Gore as the "winner" of the Vice-Presidency would be like saying that France "won" WWII.

1 I love getting hat tips!

This is a good article, l really loved the content.

I always break up when I watch this bit.

It's Friday!!! And guess what? I've got a FEVAH! And the only prescription...

One For The Math Geeks Game Theory solves the male/female toilet seat problem.

1 I gave up on the whole seat thing a long time ago. I just pee in the sink.

The Democrat Family Album Mr. Right went ahead and assembled a scrapbook of all our favorite Leftis Democrats that we've come to know and love over the last few years. Al Franken is my personal favorite.

Check it out here. Heh.

This guy's been doing this so long he doesn't even care which end of the little rodent he displays for the cameras.

On a side note, every time I watch the movie, "Groundhog Day", I like it better than the last time. Jonah Goldberg digs one out of the archives that takes a "deep" look at the underlying themes of this film. Fascinating.