Even In Oils, He's A Perv Having your family situated so the a portrait of Bubba Clinton has his hand on your daughter...Ewwwww.

Check it out at Right Wing News.

Halloween Costumes I Hope To God I Don't See On My Front Doorstep I got these via email, so I don't know the original source. Brings new meaning to the word "scary".

Some of these might be considered NSFW, so click "Read More" to see 'em as they're below the fold. more...

Top 10 Worst Album Covers Of All Time I'm still laughing at this one. The commentary is priceless! Perfect for a Friday.

Thanks to Joshua McPeak for the link.

Three Cheers For Globalization! Click here to see the how American culture is infiltrating China. Hilarious!! The looks on these kids' faces is priceless.

Thanks to Andrew Sullivan for finding this. It's streaming video so it may take time to load.

1 That is classic! I gotta link it... Not sure how I got here but I love the site! Stop by my place and have a drink... Keep up the good work! -Josh

A Work Of Genius Even though it looks like this is a joke, it's worth reading through. It had me fooled at first, though. The comments are a scream.

Powerline Imitates "South Park" I was just reading John Hinderaker's post on the al Zawahiri four-step plan for Middle-East Wahabist Islamic Domination. He presented it in this way:

This is not, to put it mildly, the picture of a successful organization. But it is an organization with a strategy. Zawahiri lays it out:

The first stage: Expel the Americans from Iraq.

The third stage: Extend the jihad wave to the secular countries neighboring Iraq.

The fourth stage: It may coincide with what came before: the clash with Israel, because Israel was established only to challenge any new Islamic entity.

This reminded me of the business plan espoused by the Underpants Gnomes on South Park. 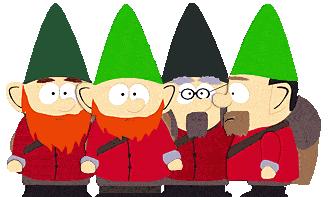 The Underpants Gnomes have a three-phase business plan, consisting of:

None of the gnomes actually know what the second phase is, and all of them assume that someone else within the organization does.

I just got a chuckle over that. Maybe the Al Qaeda bunch can adapt the Gnomes' song for themselves:
Time to go to work, work all night,
Expelling Americans, hey!
We won't stop till we expel Americans,
Yum Tum Yummy Tum tay!"

1 coincidentally, the OBL episode of SP was on last night. I think Matt and Trey's depiction of OBL and al-qaeda as Looney Tunes characters is equally apropos.

h/t: The Skipper at BMEWS