Top 100 TV Catch-Phrases According to TV Land. Personally, I think they were reaching for some of these just to round out 100.

If you've heard them all from their original source, there's no getting around it. You're OLD! And you watch too much television.

BSG Geeks Demand Better Episodes Actually, I didn't have a problem with last week's show they way so many others seemed to. It seems ever since the new season premiered with the whole New Caprica/Iraqtica controversy a lot of fans are getting paranoid that Ronald D. Moore and Co. are taking a turn to the Left in their storylines. I disagree.

The writers are bringing controversial issues into the show (i.e. arguments for and against a Cylon genocide in "A Measure Of Salvation"). But when have they not? I don't see these as Liberal versus Conservative arguments at all. They're issues relating to humanity. And they're designed (IMO) to simply make you think as well as entertain.

Remember when Luke Skywalker asked Yoda what was in the "haunted" tree on Dagobah? Yoda answered, "Only what you take with you." I think Liberals and Conservatives alike would enjoy the show more if they put some of their preconceived ideas aside for one hour. Anyway, it works for me. If you have iTunes, I highly recommend downloading the podcasts and listen to Moore's commentary as he sucks back double-malt scotch.

UPDATE:
Not too shabby. In two weeks: Lee and Kara take out some pent-up sexual energy in the boxing ring. Snootchie-bootchie!

UPDATE DEUX:
Quote from RDM's commentary from last week (on the topic of genocide):
"It's not about giving the answers, it's about asking the questions."
The scene with the debate over Cylon genocide reflected an actual debate among the writers. Some of the writers were like "well, why wouldn't they release this virus? Duh!" Others raised the question, "well are they really people? Are they beings? Would it actually be genocide?"

Me: Those who feel strongly about a culture of life should think about it. Humans gave life to the Cylons. Are they life? They're machines but they're partially organic. They possess living cells, but do they qualify as sentient beings? Could they possibly have souls? It blows the mind, really. Something to ponder. For what it's worth...

1 Here's what I thought of it.

2 Meh. I found tonight's episode to be almost painfully predictable, something I enjoyed not being stricken with for most of this series. Next week's looks interesting, though...

3 Eradicating the Cylons would have been the ultimate in "jumping the shark" in the BSG-TV land. So being, it invalidates any debate in this show regarding genocide in the real world. I don't need a TV show to spark questions about genocide...all I need to do is listen to any speech by Ahmednejad. Too bad Ronald Moore isn't questioning hitler, jr. No one seems to have picked up on the veiled indictment of organized religion during the 'baltar being tortured scene' on A Measure of Salvation.

As for Hero: A menage-a-tois on a basestar - a common practice of cylons, no doubt. When will this storyline end??? Why did Kara run to Tigh with her discovery of Bulldog's way too easy escape? Why not take this to Bill? Hmmm.. Interesting chat between Laura and Bill when he hands his resignation letter: Laura speculates the Admiralty may have set Adama up to provoke a war they wanted....where have I heard this before? Laura was quick to follow up this statement by channeling Susan Sontag in order to impress Bill with this gem: We did a thousand things good and bad everyday for 40 years to pave the way for this attack. Call me crazy, I still blame the Cylons for this attack - not the humans. Finally...Finally, Bill asks Tigh about what really went down with Ellen. I have high hopes for these knuckleheads! Two weeks till 'Unfinished Business'...two long weeks...

4 Not having cable, and not having seen this particular episode yet, I know only what I've read on the BSG blogs. As far as the "Baltar tortured" episode goes, with the debate about genocide, I stole this quote from another blog and it's apropos here: To draw an analogy from metallurgy and apply it to morality --pure morals may be more valuable, but alloys are more useful. So my advice would be to follow the instructions of the Dark Lord of the Sith in Episode 1: "Wipe them out. All of them."

6 Well, obviously, that aforementioned "love" did not go quite as far as they thought it would... This two-week gap is going to kill me!

7 Lee and Kara's encounter on New Caprica and the fallout of this tryst cement the belief that Dee is Lee's consolation prize - he can't have Kara so he settles with nearest warm body. I've read script sides for several of the upcoming episodes - I can tell you all is not well in the Lee/Dee universe. 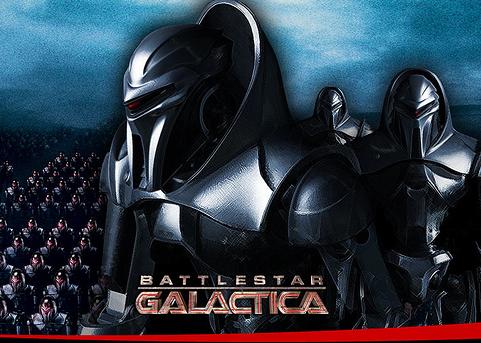 1 That reminds me...I set up a blogroll at Blogrolling.com called "BSG Bloggers." I have a paid account so it won't go away and should load from the faster servers... If you could spread the word? Anyone who wants to join, just send an email to stark23x+bsg at gmail dot com with your blog URL and I'll add you and send you the code to add the blogroll to your own blog...

2 Okay, this has to be said... Lee and Kara, even pissed off at one another, have volcanic chemistry. RDM...Please more Lee and Kara, oh an airlock DEE!!

3 Hey, Dee is fine. No airlocking fine BSG babes unless it's already known that they will resurrect in just-as-fine new Cylon bodies.

4 So....who will be "The Final Five???" Like my new haircut, btw? I was so sick of being called Goldilocks.

5 Just a little nit-pick with the series. Where the frak are all the hunky cylons? Hmmmm? The girls might be babes, but the guys are complete dorks. Not that I'm complaining too much....Lee has definitely brought sexy back - thank the gods!! My picks for the 'Final Five' are: Dee Gaeta Racetrack Ellen Tigh Tom Zarek alt: Gaius Baltar