"Superman Returns"...Is That A Good Thing? 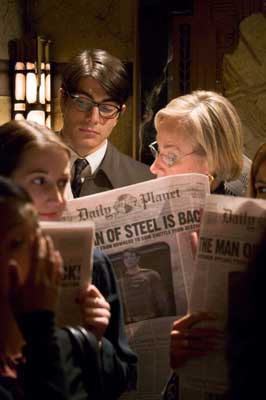 Some of the early reviews are in - caution all contain some degree of spoilers (if it's actually possible to spoil a plot everyone is already familiar with):

Newsweek (thumbs up): "[Director Brian] Singer did the right thing. From the start of this gorgeously crafted epic, you can feel that Singer has real love and respect for the most foursquare comics superhero of them all, as well as a reverence for the Donner version, which serves as his visual and emotional template."

The Hollywood Reporter (thumbs up): "This high-wire act would have gone for naught if Routh had not so capably filled the Man of Steel's costume. Like Reeve, he is just right physically, looking at times like the old comic book drawings of Superman. There is honesty in his acting where the emotions that play across Superman/Clark Kent's face and body come from deep within."

Variety (thumbs up): "Singer imprints his handiwork with its own personality. Despite its acute awareness of what's come before, 'Superman Returns' is never self-consciously hip, ironic, post-modern or camp. To the contrary, it's quite sincere, with an artistic elegance and a genuine emotional investment in the material that creates renewed engagement in these long-familiar characters and a well-earned payoff after 2Â½ hours spent with them."

And then, to provide a little balast, we have a dissent from Libertas (F*** This Sh*t):

Superman Returns FX tend to be on the hyper-detailed side, and impressive. Clearly about $200 million of the films budget was spent on FX, but after a while the visuals cease to be compelling. You just want a character, some recognizably human personality to hang on to. You cant make a 2 1/2 hour film and not have characters - but thats basically what Singers done here. He expects you to be blown away so much that you dont notice whats missing: humanity, emotion, personality. One other point: superior filmmakers like George Lucas and Peter Jackson use visual effects to create worlds, new environments. Singer does none of that - his New York looks no different than Spider-Mans New York, no different from any other New York - just louder and a lot more violent.

Id like to stop the review here and make a suggestion to the powers-that-be in Hollywood. Although some of you read this blog, you wont listen, because the din of the cash registers will be too loud when this film opens in a few weeks  but here goes anyway. Hollywood spends a lot of its time and seemingly all its money these days making superhero movies about guys with special powers. Superman, Spider-Man, Batman, X-Men, Daredevil, Hulk, Fantastic Four, etc., ad nauseum. And heres the rub: I dont remember guys like Humphrey Bogart or Gary Cooper or James Cagney or John Wayne or even Harrison Ford having special powers. The only special powers those guys had were their fists, their wits, and their character - their substance as human beings. Most of us in life dont have special powers to brood over. Were just regular Joes trying to get by, and we have a hard time relating to wonderboys like Brandon Routh or Tobey Maguire because their problems seem extremely trivial, and because while they probably look great in Zegna suits on the cover of GQ they dont look like they can take a punch. Nor do they seem to stand for much. I know what Gary Cooper stood for in his films. I have no frigging clue what your cute little superheros stand for, other than their own narcissism.

Jason's review may seem harsh and more of a critique of the whole genre, but he does make some valid points. The original "Superman" and "Superman II" were heavy on character and story wrapped in a few well done visual effects and a kick-ass soundtrack. In his opinion, this is more of special effects showcase built around an existing set of characters. In other words, it rings hollow for him.

I felt something similar about this year's "Poseidon", but I think in this case the movie audience will look past this. There's something about "Superman" that really jacks up a young audience and fuels nostalgia for us old farts. I agree that the bar for great filmmaking has been substantially lowered over the last ten to twenty years. "Superman Returns" is probably not a great film. It probably won't stand the test of time as the originals (at least I & II).

But the bottom line is I have a ten-year old who can't wait to see it. And I can almost guaranty that he's going to love it. My own expectations are that I just hope that I like it. Because nowadays when I go to the theater, those are just about the best expectations I can realistically allow myself to have.

"The Break-Up" Off To A Good Start Reports have come in that the new Vince Vaughn/Jen Aniston comedy, "The Break-Up" pulled in a respectable $13.7 million last night, causing Universal to revise up their expectations for the opening weekend gross.

Look, here's the bottom line. This is another one of those "chick flicks" in raunch-comedy clothing. It's got something for him and for her. When was the last time you can remember a movie about relationships that the average guy is eager to see?

Vince Vaughn is such a big draw for men because he plays pretty much the same character in every movie. And as my friend, Kevin, says: "I'm perfectly OK with that". Except for the brief period when Vaughn would play a psychotic nutjob, his comedic talent is exactly what guys like me who were weaned on "Animal House", "Caddyshack" and "Stripes" appreciate - a confident, yet unpretentious style wrapped in an archtypical "everyman" package. He's the regular guy, but the one in the crowd who always seems to land on his feet.

Jennifer Aniston has really picked a series of unfortunate roles in films. But I recently saw her in "Friends With Money" and she was pretty damn good. It was actually the first time I saw her in a movie (besides "Office Space") and didn't think of Rachel from "Friends".

The key here is the chemistry that Vaughn and Aniston seem to have which should bode well for the film's success.

However, it's still way to early. Critics have savaged it, but most critics harbor an elitist attitude that handicaps a movie like this before they even see it. Aniston's off-screen problems with Brad Pitt have probably soured some of these folks on her as well. While this one has been much anticipated, it could easily tank after Sunday if word spreads that it doesn't meet expectations.

UPDATE: 6/5/06
All told, the film took in a little over $38 million. While it exceeded expectations and was the third-highest grossing opening weekend for a romantic comedy, the real test will be the next couple of weeks. Normally, movies lose about 50% in their second weekend. What it will come down to is word-of-mouth.