"United 93" Endorsed By Father Of Todd Beamer David Beamer, father of United Airlines passenger Todd Beamer who lost his life on that fateful flight, says the filmmakers "got it right". He wrote an Op-Ed in the WSJ Online today. He calls the film a wake-up call to a nation coming perilously close to forgetting the events of that day and enemy that we now face.

"There are those who would hope to escape the pain of war. Can't we just live and let live and pretend every thing is OK? Let's discuss, negotiate, reason together. The film accurately shows an enemy who will stop at nothing in a quest for control. This enemy does not seek our resources, our land or our materials, but rather to alter our very way of life.

I encourage my fellow Americans and free people everywhere to see 'United 93.'

Be reminded of our very real enemy. Be inspired by a true story of heroic actions taken by ordinary people with victorious consequences. Be thankful for each precious day of life with a loved one and make the most of it. Resolve to take the right action in the situations of life, whatever they may be. Resolve to give thanks and support to those men, women, leaders and commanders who to this day (1,687 days since Sept. 11, 2001) continue the counterattacks on our enemy and in so doing keep us safe and our freedoms intact.

May the taste of freedom for people of the Middle East hasten victory. The enemy we face does not have the word 'surrender' in their dictionary. We must not have the word 'retreat' in ours. We surely want our troops home as soon as possible. That said, they cannot come home in retreat. They must come home victoriously. Pray for them."

Some people muse the the release of this film may be too soon. My concern is that, for some, it may be too late.

1 I recently rewatched some of the LIVE television footage that I happened to record on 9/11/01, and all the feelings of that day came alive: I was shocked, afraid, and angry. I truly believe that Americans need to experience those feelings again. This country forgets too easily. I am thankful that "United 93" was made. There are so many Hollywood liberals (Michael Moore...George Clooney...Julia Roberts...etc etc etc) whose movies I refuse to see because I don't want to give them a single cent of my money. "United 93" is movie that none of them would have ever dreamed of making. I intend to show my support for (1) the War on Terror, (2) the notion that Americans should NEVER forget about 9/11 and what it meant and still means for the future of this country, and (3) this kind of movie-making. And I am going to do so with the only thing that seems to get anyone's attention these days: MY WALLET. So, below is my game plan. If you feel the same way I do, follow suit... - See "United 93" for the first time on its opening weekend. - See "United 93" for a second time in its 2nd or 3rd weekend of release. - See "United 93" for a third time in another month or two. - Rent "United 93" when it comes out in the video stores. - Buy "United 93" when it comes out on DVD. "United 93" will be the next "The Passion of the Christ." Hollywood isn't going to know what hit it. Hopefully America will remember how it felt that awful day. So much is at stake. It is never too soon.

2 I will be attending the 10:45 pm Friday viewing! I saw the A&E version and was in tears for most of it. I agree that these events should not be swept under the rug in the name of sensitivity. We would be betraying not only those who died that day, but ourselves and our children.

3 I just saw United 93. Go see it. Just go see it. And, when you are sitting there, in the theater...remember that its events were not a movie. They were real. They were very real for the people on that plane, and on the three other planes, and in the World Trade Center towers, the Pentagon and the FAA and military command centers, and for all of us watching and listening and praying that day all across this country. Every American needs to see this movie. It is absolutely NOT "too soon" for this movie. People should actually be asking if it's too late...

4 Saw it on Saturday. I agree, every American should see it. It's not always easy to watch, especially towards the end, but it will bring back everything you felt on that day. And those feelings must never be forgotton.

Irony This is the movie poster for Al Gore's "global warming" scare flick: 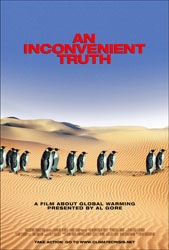 Does anyone else see the pack of penquins blindly following each other into a desert as a metaphor for the radical environmentalist movement?

Jason Apuzzo at Libertas asks if Americans are "ready" to see the film. His answer: most definitely yes.

"Basic Instinct 2" Goes Over Like A Turd In The Punchbowl Well, despite the prospect of seeing 48-year old Sharon Stone stark naked and performing deviant sex acts, the much-hyped sequel to "Basic Instinct" made as much money this weekend as "Larry The Cable Guy: Health Inspector" (which is in its second week of release).

And who does the director of the original film blame? The U.S. government. No, really?!? Dutch-born Paul Vernoeven, the man who brought you such flops as "Showgirls" and "Hollow Man", says that the American government has been foisting its Christian values on its citizenry, making them unwilling to embrace "erotica".

Scribe Nicholas Meyer, who was an uncredited writer on 1987's seminal sex-fueled cautionary tale "Fatal Attraction," agrees, noting that the genre's downfall coincides with the ascent of the conservative political movement.

"We're in a big puritanical mode," he said. "Now, it's like the McCarthy era, except it's not 'Are you a communist?' but 'Have you ever put sex in a movie?'"

Oh, give me freakin' break. A country that has spent (to date) $82 million to see a love story between two gay sheep herders is in a "big puritanical mode"? Nice try, guys. But the sad truth is that the movie SUCKED

1 I clicked and read those reviews. Yikes, what a turkey! Hillarious that Vernoeven thinks that people stayed away from a sex-thriller starring a 48 year old has-been (who, imo, wasn't all that to begin with) because they were afraid it'd be "too sexy". LOL!

2 Disclaimer: my assertion that the movie sucks is based on a 6% "rotten" rating on rottentomatoes-dot-com. I haven't seen the movie nor do I have any desire to. Just to clear up any confusion. :wink: