Magnum, P.I. - The Movie Hollywood is reporting that a theatrical film of the TV show is in the works.

[Rawson Marshall] Thurber, who wrote and directed the hit comedy "Dodgeball: A True Underdog Story," is not making a spoof but rather something akin to the tone of the show, which mixed humor and danger. The story line for the film sees Magnum, with the help of his former military pals, searching for a missing buddy.

Call me sentimental but I can't think of a single reason for not bringing back the old cast, at least Tom Selleck. I don't know what they're planning but who else could possibly play Thomas Magnum? 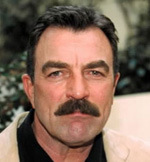 I mean, honestly, who?

1 Sorry, but he wasn't exactly an "80s crush" for me. Of course, I didn't really watch the show, but...I guess I didn't really care for mustaches. Of course, when he was on Friends with Monica (not that I watched that show very much either), he was the hot, older man, and that did a little something for me. But not in the 80s. Plus, have you seen any of those old Magnum episodes lately? Those shorts were so...SHORT! Silly looking - not that today's stupid baggy things are any better. ...This comment is starting to sound like that cellular service commercial with the little cheerleader girl who keeps talking a mile a minute and at one point says, "and I was like 'whatever,' and he was like 'whatever,' and I was like 'whatever!'" I know that this is not the kind of post that any blogger hopes will show up on their site. I am sure that I have ruined any semblance of relevance and credibility you might have had out in the blogosphere. I apologize. Just remember that it would take a lot of legal finagling for you to disown me. But you could probably remove this post pretty easily...

"Brokeback" Not Exactly Breaking The Box Office Despite Variety's predictions that "Brokeback Mountain" could reach as high as number two this weekend, the film barely finished at number five ahead of Jim Carrey's remake of "Fun With Dick And Jane" but behind the new Queen Latifah comedy "Last Holiday". The indy love story about two gay cowboys isn't exactly "on fire" despite garnering so many Golden Globe awards last week.

If fact, the number one film this weekend, "Underworld: Evolution", earned more in its first three days than "Brokeback Mountain" managed to gross after five weeks of release. The reason? Kate Beckinsale is smokin' hot! That's what guys want to see.

Look, your average straight male isn't going to go see "Brokeback". And the critics will say it's due to homophobia. But the reality is that it's due to indifference. Your average Joe Six-pack just has no interest in seeing any love story, much less one that looks like a sausage convention. For all the buzz about this film, it's really nothing more than a chick flick. It's one for the wife or significant other to go see with her friends. Fair is fair. Would she go along with you dragging her to see "Hostel" (which BTW has also grossed more than "Brokeback" in less than half the time)? I don't think so.

Hey, do you have any idea what it takes for the Mrs. to drag me to ANY movie that's billed as a love story? If I'm going to go through the aggravation of getting a sitter, dealing with the crowds and plopping down $19 for us to go to the multiplex, it damn well better feature a sweet-looking lead actress (and a couple of decent-looking supporting actresses as well).

It should come as no surprise that "Brokeback" has limited appeal. But try as they might, the Hollywood elite are not going to convince the vast majority of men that they should appreciate this kind of film and if they don't that there is something wrong with them. One thing you can count on, however, is that the more the box office returns continue to underwhelm, the more likely that "Brokeback" is guaranteed an Oscar for "Best Picture".

1 As a woman who likes love stories, I don't want to see "Brokeback" because I can't stand those two actors. The whole gay thing bothers me not, heck, I've watched more graphic stuff (ooo hoooo!) than Heath Ledger and Jake Whateverhisnameis get all smoochy and what not. John Wayne is probably rolling in his grave.

Review: "V For Vendetta" No I didn't see this crap. But "The Road Warrior" did a guest review over at the Conservative Film site Libertas. Not only does the movie completely suck but he makes a ton of great observations about how it's basically a huge Left-Wing paranoid fantasy, and explains how those on the Left are what they claim to fear. A great read.

1 No I didn't see this crap. But "The Road Warrior" did a guest review over at the Conservative Film site Libertas. Not only does the movie completely suck but he makes a ton of great observations about how it's basically a huge Left-Wing paranoid fantasy, and explains how those on the Left are what they claim to fear. A great read. People on the left are what they claim to fear? Did they lie to get us into a war in the middle east or was that George W? Indefinite detentions without due process was that a liberal idea or did W and company dream that up? I've read the review and it seems that the paranoid fantasy belongs to the movie reviewer. The projection of republican faults onto them thar evil libs is pretty funny though. I suppose the lack of self awareness that is required to be a Conservative right now is responsible for that.-Whovian222@msn.com Can't wait to see your well thought out reply!