Dispatches From The Red States (Part 5)... Wednesday (25th).
"Way down yonder on the Chattahoochee,
It gets hotter than a hoochie coochie..."
Well, that's all well and good but once you get in the Chattahoochee it's colder than a witch's teat in a brass bra. As I discovered...

We headed down to Jones Bridge Park along the Chattahoochee river that day. The water was pretty cold. In fact, I don't think I'll have to worry about birth control anymore as I may have permanently disabled myself. Actually, it was refreshing and I think I surprised the heck out of everybody when I submerged myself.

My four-year old, Justin, had a blast too: 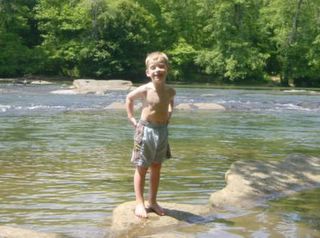 The biggest problem we had was avoiding the poison ivy which grew wildly along the river banks.

After dinner, the two old married couples got together to watch the season finale "Lost" (babysitting courtesy of the grandparents). I only started watching this part-way into the season at the insistence of my sister-in-law and had to catch the older episodes in repeats. But it was worth it because it's become my favorite TV show (after "Battlestar Galactica", of course).

It was margaritas all around, topped off by a rather tasty red wine called "Fat Bastard". Unfortunately, I found out it was from France, so I can't like it too much.

Slept well that night. Good thing I didn't have to get up early the next morning.