Hangin' at the lake with Kevin. 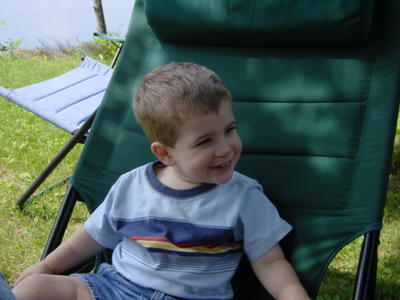 My youngest. Ain't he cute?

If it's Saturday...It must be time for the Diane Lane Photo of the Week...
"Now get over here, sport..."

You Know You're From Connecticut If... (note: this is a much pared down - and relevant - version of the actual Blogthing list)

Is Coach Coughlin going soft? According to this article, he may be.

This is BS, man. I don't want the coach to be a "buddy" to his players. We had enough of that with Jim Fassel. I want to see him stomping up and down the sidelines like General Patton. I want him driving the players to their maximum limit. I want to see him wearing a cap that says "Bad MotherF---er" on it. If they mouth off to him, I want them running laps in the summer sun until they start spitting up blood!

What's all this mollycoddling crap?

Kinder, gentler my ass. Say it ain't so, Tom!

Here he is preparing for the role while on a recent trip to Denmark. At the time this photo was taken, the Senior Senator from Massachusetts was quoted as saying, "Er, uh...gawd-dammit. I thought they had Heinekens ovah heah. And weah the hell did I pahk my cah?"

UPDATE: Here is Senator Kennedy later that day without the costume (he never did find his car) sailing on the Baltic Sea.

Must be why I have a blog. Hmmmm.

Moonbat "Dean of the Press Corp" makes a promise... Helen Thomas said she'd "kill herself" if Dick Cheney announces he will run for the Presidency in 2008.

The world's stupidest man pays for his lack of judgment... The story, out of Thailand, is about a wife who cut off her husband's johnson.

OK, we've heard this kind of thing before. But this one is just unbelievable.

"A Thai woman cut off her husband's penis after he asked her to make love one more time before he left her for another woman."

File this under "What was I thinking?".

No Child Left Behind... Guess what? The numbers show that it's working. And who's benefiting the most? Why, the children that were getting left behind. Imagine that.

Umm, has this ever happened to anyone else? Methinks me smells a bogus lawsuit here.

Lame Duck, huh? David Wissing posts a pretty good summary of American Politics in under 250 words that he found at - of all places - ABC's The Note.

Isn't it awfully nice to have a penis?
Isn't it frightfully good to have a dong?

It's swell to have a stiffy.
It's divine to own a dick,
From the tiniest little tadger
To the world's biggest prick.

So, three cheers for your Willy or John Thomas.
Hooray for your one-eyed trouser snake,
Your piece of pork, your wife's best friend,
Your Percy, or your cock.

You can wrap it up in ribbons,
You can slip it in your sock.

But don't take it out in public,
Or they will stick you in the dock,
And you won't come back.

Think about it. Think carefully...

Now go get a stiff drink, and let's get to work.
photo created by John Hawkins

Honest to God, is this REALLY necessary?

BMEWS links to this story and picture of a billboard in Massachussetts promoting a gay website. I'm not questioning the group's right to purchase the ad space.

I'm questioning the their judgment. Do gay activists really think they're going to win people over to their line of thinking by shoving this in people's faces? I mean, "Come together"? Please.

If anything it'll probably generate a backlash against what they're trying to accomplish. Tolerance is one thing, but you're not going generate approval with stuff like this.

Allow me to paraphrase the Skipper: Just so we're clear on this, I am not a homophobe. I just happen to be a heterophile (I dont hate homosexuals, I just love women, preferably completely nekkid). Whether or not you want to accept the fact that 98% of the rest of the men in America feel the same way that I do or not, it's reality. So pretty please, why dont you guys just keep it to yourself and well all get along just fine. 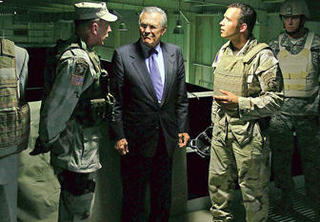 One of the things I love about Rumsfeld is that he always has this look on his face like he's just itching to hand someone an ass-whuppin' for no particular reason.

Gov. Mark Warner - More of a problem for the Dems than a solution... Steve the Llama Butcher thinks my shameless promotion the Presidential candidacy of Sen. George Allen (VA) is futile. This is because apparently the name of the Democrat Governor of Virginia...dum...dum...duuuuuuuuum...Mark Warner makes
him nervous.

But as his partner, Robbo, points out, the WSJ remains skeptical about the viability of Warner should he challenge Allen for his Senate seat in 2006.

The Virginia state budget has expanded by 26% over Gov. Warner's tenure, about twice the national average for the states. He received a "D" on the Cato Institute Fiscal Report Card of the Governors. "The claim that Mark Warner is a fiscal conservative," complains Peter Ferrara, president of the Virginia Free Enterprise Fund, "is straight out of an Aesop's Fable."

The challenge for Gov. Warner is to try to sell this fable to Democrats and independent voters who live outside the Old Dominion State. He benefits from the fact that "hate Bush" Democrats want to believe in the existence of a charming, pro-business, fiscal savior who can put red states like Virginia back in play. That's why the pros in the party are trumpeting "Clinton-Warner" as the dream ticket in 2008. All that seems to be standing in Mr. Warner's way is his disappointing record as governor.

Warner should also make the '08 race more interesting for Democrats as he campaigns to the right of Hillary during the primary season while the MoveOn.org Left wing pressures her to stay true to the Uber-Liberal base.

Classic TV Wisdom of the Day...
This is it (This is it),
This is life, the one you get,
So go and have a ball.

This is it (This is it),
Straight ahead and rest assured,
You cant be sure at all.

So up on your feet,
Somewhere theres music playin,
Dont you worry none,
Well just take it like it comes,
One Day At A Time

The Translation:
Shut your cake-holes and stop moaning about how much your life sucks. Everybodys life sucks sometimes. And when there seems to be some people who dont have any problems, they really do. Youre just not seeing their reality. Life is a gift to be grateful for. You try and enjoy it - one day at a time - because you never know what the future holds.

You take the ups and the downs and find happiness in the moment even though sometimes it seems there are more downs than ups. Take Ann Romano, for example. Shes a single-mom, wannabe feminist raising two whiny and demanding daughters all on her own. One grows up to be a recovering drug addict and the other runs off and marries a famous rock star.

She has a wimpy-assed, Liberal boyfriend who falls woefully short of the strong male presence these girls could use in their lives. What do they have to rely on in that department? The lecherous custodian with the cheesy moustache that lives in the basement. This is the guy who lets himself in to their apartment everyday for no apparent reason other than to hit on Ann and insinuate that all she really needs is to have her plumbing snaked.

So when life gets you down, STFU and appreciate what you have. Howd you like to be Ann Romano? Or worse? But we can all learn a valuable life lesson from Ann Romano. No matter what headaches and heartaches she has to deal with, she manages to find the inner strength to deal with it allOne Day At A Time.

Rankings of "as yet undeclared" Presidential prospects... At TimSaler.com. For the GOP, it's Sen. George Allen:


Allen remains the favorite with Washington insiders. Conservatives believe that, in a crowded primary, a consensus candidate will have to appear. With many disgusted by McCain, ideologically out of sync with Giuliani or Pataki, and unsure of the ability of lesser-known candidates like Huckabee and Pawlenty, Allen just makes good sense. Hes reliably conservative, is generally considered to have what it takes to win the general election, and doesnt have any gaping holes as a candidate. His only electoral problem in terms of the primary is that he may not be able to win either of the first two races in Iowa and New Hampshire. He may have to settle on starting with South Carolina and sweeping the South, hoping to knock some candidates, namely Tim Pawlenty, out of the race. Mike Huckabee would probably be his main competition in Southern primaries.

Of course it's way to early. But if you assume Pawlenty wins Iowa because he's a local boy from neighboring Minnesota and McCain takes New Hampshire (with the support of the MSM, of course) I don't see those two contests meaning all that much anymore in terms of momentum. Momentum would come to a candidate not expected to win either contest.

I've already laid out my reasons for backing Allen, not the least of which is that he's the most attractive Conservative that has a good shot of winning nationally. Saler's analysis that he "just makes good sense" pretty much hits the mark.

Off note, according to Saler, on the Dem side the top five are:
1) Shrillary
2) Evan "empty suit" Bayh
3) Wesley "deer in the headlights" Clark
4) John "man of the people in a mansion" Edwards &

5) Mark "no moonbat would vote for me" Warner

Multiculturalism comes back to bite us... My sister-in-law brought my attention to this editorial in The Australian, which looks at how the touchy, feely attitude of moral and cultural relativism has sent the wrong message to those who want to kill us.


How times have changed. When four young British Muslims set off from Luton, detonating four bomb blasts in London, most people were shaken out of their reverie. Eventually, it seems, reality bites. Sometimes slowly. Sometimes cruelly. Now, more than a few people are saying that tolerance is not as safe as it seems. That too much of the stuff can be a problem because it suggests to those who detest our values and our societies that we will not make judgments about what is right and what is wrong.

The good news is that more and more people seem to be coming around to recognizing the fallacy of multiculturalism. The bad news is that there are still too many on the Left that cling to it. And they like to shout.