Dispatches From The Red States (Part 4)... Tuesday (24th). We all headed up to Stone Mountain Park that morning. Below is a carving in the huge precipice of Confederate President Jefferson Davis, General Robert E. Lee and General "Stonewall" Jackson. Students of history need no explanation. Suffice to say that these are the biggest heroes of the South.

I had to explain to my son that Abraham Lincoln was NOT in the carving and it was probably better to just leave it at that.

Later we explored the amusement area of the park and got a bite to eat. This is me with my son, Ryan. 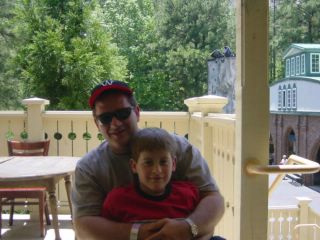 Notice the "W - Still the President" hat. One of the few places I can wear this without getting dirty looks. 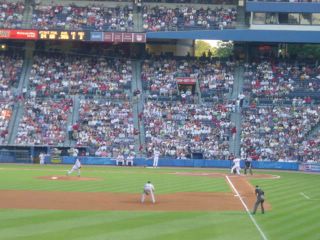 In all honesty, it was one of the nicest ball parks I had ever been to. It also has lots of attractions that Ryan really enjoyed. Lorie was all decked out in Braves red, so I kept close to her and Cliff because I figured they neutralized my Mets shirt and hat. And of course, the Braves threw the Mets an old-fashioned 4-0 ass-whuppin'. But we had fun anyway.

At least I think we did. Went through a lot of cash on the $6.25 Icehouse beers that night. Hmm.

Next up: A dip in the 'hootch and getting "Lost" over margaritas...
Previous Dispatches: Part 3, Part 2 & Part 1