Dispatches From The Red States (Part 1)... Well, as it turned out it wasn't the nightmare I'd feared it would be traveling over two-thousand miles round trip with a family of five. We had our share of rough patches on the road but all in all the kids were great.

First let me say that it's been almost five years since I had been down South and I was reminded of what I'd always come to know whenever I travel in that part of the country - the people are nicer. I don't mean that in every case folks in the North are not nice. Usually in the privacy of their own home we're quite friendly. It's in public where we seem to change.

Generally speaking, once you cross the Mason-Dixon line, people tend to be much friendlier to strangers. They make eye contact, they asked you "how're ya doin' today?" and when you talk to them they don't automatically assume you're an a-hole to be avoided. I don't know if it's the density of the population or its diversity but it seems that in the Northeastern section of the U.S. the people can be as cold as the winters. It's very sad. And it's one of the reasons I found myself constantly turning to my wife and saying "tell me again why it is we live up there and not down here".

I encourage everyone up North who has never or rarely been out to see the rest of this great country of ours to pay it a visit. A little interaction will bring a profound change of perspective. OK, off the soapbox and on to the trip...

Thursday and Friday (19th & 20th) were travel days. Day One: Over the Tappan Zee bridge and down through New Joisey to pick up I-95 for the rest of the day. Stopover was in Richmond, VA. All in all a pretty big accomplishment with a nine-year old, five-year old and two-year old in tow. Day Two: Continue down I-95 with a right-turn towards Raleigh, NC. Then good old Route (pronounced "root") 1 to Sanford.

Saturday was a down-home wedding celebration for my nephew and his new bride. Congratulations Sgt. and Mrs. Jeffery Armstrong!!

It was the best picture I could get. Her head was down to avoid the bird seed being hummed at her face.

And here's the stretch Hummer used by the wedding party: 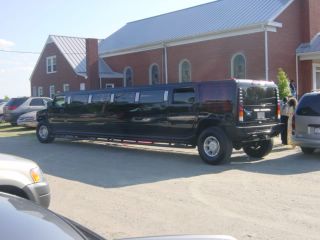 Ain't she a beauty?

At the reception the groom sang a romantic song to his new wife and the D.J. did something different - he had all the single guys circle the bride, get on one knee and sing a rendition of "You've lost that lovin' feeling" to lament the fact that Trish is now off the market. Nice touch.

Fortunately for me, I was sober that evening but the kids wiped me out. And early the next morning it was back on the road again.

Next up: "Ex-Donkey went down to Georgia..."