Quote Of The Day OK, I'm a big fan of John Cusack's work going back to The Sure Thing. So I'll take the following with a grain of salt:

On being attacked from the right as a Hollywood liberal: "So maybe I'm smug, and maybe the Democrats are petty. Maybe you're right. But you're ordering people to their deaths. How are those two things comparable?"

Reminds me of one of his more philosophical lines from Better Off Dead:

"Two brothers... One speaks no English, the other learned English from watching "The Wide World of Sports." So you tell me... Which is better, speaking no English at all, or speaking Howard Cosell?"

You can get a feel for the same kind of tortured logic in either quote.

Cameron Diaz: Belch Queen Actress Cameron Diaz says the burp award she won on a Nickelodeon TV show was "the best award I ever received".

"I chugged a Diet Coke before I went on stage and it was like 'Bwaaapp'."

Now obviously I take this statement with a grain of salt. I mean, I doubt she was being serious. But then again, she's also the same person who said "My favorite thing about Bhutan is they measure their country's wealth, not based on dollar amount but on gross national happiness."

Um...maybe she was serious about that belching award.

1 Yeah, well, she gets recognition because she's famous and dating Justin Timberboob, but I could belch her under the table. Really.

2 That'd be one belch I wouldn't mind tasting... Ugh... what the hell does that mean?

3 You forgot her, "If you want rape to be legal, don't vote!" belch on Oprah.

Rosanne: "I Could Totally Win Him In A Mind Contest" This is pretty amusing:

Actress/comedian Roseanne Barr, who claims to be a psychic (Â“I channel the higher mind, the higher universal mindÂ”), used the made-up word Â“overcomeableÂ” and employed teenage phrases such as Â“likeÂ” and Â“totally,Â” insisted on Monday night's Jimmy Kimmel Live on ABC that she would win a battle of intelligence with President Bush.

Hey, I know this is basically her "schtick", but you just know in the back of her little mind she believes it.

1 Could she beat him in a singing contest as well? Just wondering.

Pictures You Never Expected To See Here's one:

Apparently, they enjoyed a nice lunch together today.

I'd be hard-pressed to argue that one. Especially if you review the evidence here: Jessica Biehl (NSFW)

1 1. Someone should tell her she's too old to be able to take a bath in that sink. 2. She seems very determined not to show *everything.* 3. No way in hell am I telling my husband (gfbil) about this post of yours. 4. Pervert! 5.

2 Ya know, she's not bad. But sufficiently sexy to supplant last year's pick Angelina Jolie? Not. Even. Close. 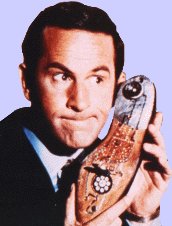 Get Smart's Don Adams died today of a lung infection. Adams' portrayal of Maxwell Smart, Agent 86, was a real treat to watch in reruns when I was a kid. The show, created by Mel Brooks and Buck Henry, was a great lampoon on the whole secret agent/James Bond genre and it was one of a kind.

OK, so they're real 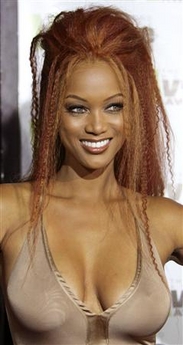 It's official. Of course, they could be full of Budweiser for all the good it does me.

I'll never be able to watch "The Princess Bride" the same way again... Princess Buttercup recently unleashed some gratuitous F-bombs for the benefit of the press. Angered by recent critics of her husband Sean Penn's recent jaunt to New Orleans, she let 'er rip:

"To them, I say 'F--k you!'" Robin Wright Penn told me yesterday at the Toronto International Film Festival, where she was hawking a very peculiar indie movie, "Sorry, Haters," in which she stars as a deranged but beautiful rap video channel employee who's seeking post-9/11 vengeance against a Syrian taxi driver.

"I think it's f-----g pathetic to be belittling him," Wright Penn raged - a blond, blue-eyed lioness protecting her mate.

Reportedly, her PR guy pulled her aside and said "I would not say such things if I were you" after which he sent her off with a six-fingered man to the Pit of Despair.

Jane no longer Fond-a the idea of an anti-war bus tour... Roger Friedman of FoxNews is reporting that Hanoi Jane is deciding against following through on her plans to conduct an anti-war tour in a vegetable-oil fueled bus next March.

Her reasoning? She doesn't want to distract from the upcoming Cindy Sheehan anti-war bus tour. Umm...yeah, right. More likely she's decided that Sheehan's lack of popular success (outside of moonbat circles) is an indication of the negative effect such a tour might have on her future career plans.

She had a moderate success recently with the film "Monster-In-Law", but that was before she began reverting to her treasonous ways. If she expects any similar successes, she'd best keep her trap shut. Fonda says her agents are currently looking at scripts for a new film.

Of course, she's still going to appear with British Quisling George Galloway in two weeks. Maybe no one will notice.

For the whole lowdown on Jane Fonda's long history of anti-American and pro-Communist activities (most of which the average person doesn't know about), I suggest you get a cup of coffee and go here. It's not pretty.

1 I really wish she would have followed through with her tour so I can watch her totally exposed for what she is for a new generation and watch what's left of her career go down the toilet.

2 My goodness, such a cynic. Jane is truly concerned about the message...she just wants Cindy to carry the torch. Hah!

You can't trust America's TV news, says Clooney... Interesting headline, huh? Lefty actor/director George Clooney tells the British News/Telegraph that television news in the U.S. should be viewed with a critical eye - something Conservatives have said for...well for as long as there's been television.

What's this? Has Clooney stopped drinking the kool-aid? It can't be!

It isn't. Here's the actual quote:

Now, with the onset of cable television and "130 different channels", the quality of news was "fractured", with each network, like Fox, playing to audiences with "specific belief patterns".

Ah, so it's the evil Fox News Channel you see. Of course I'll bet Clooney had no problem with tv news back in the days when there was only CNN.