A few things come to mind when viewing this picture:

Lee (Apollo) seems to have lost his beer gut and gained a tan...when you tan in space does anyone know?

Why is Kara (Starbuck) pictured sitting on the Cylon & Friends side?? She should be sitting in Lee's lap...

Is the former Madame President not wearing anything under her suit jacket?

I discovered an additional picture from the upcoming Season 3.0 and found it contained a shocking spoiler: 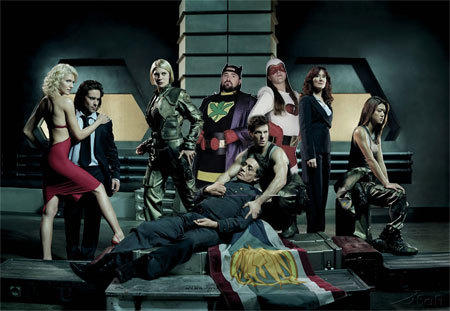 I have a nagging suspicion that Reuters might have had a hand in this...What do you think?

Is It October Yet?

The usual political undercurrents lacing the plotlines of BSG look as though they will be turned up a notch in Season 3.0 based on the recent interview given by Ron French, a BSG Line Producer:

KTW: I understand the show is pretty political. What's the most risque episode you've been involved with?

RF: "Well, it's on cable so there's quite a bit of risque stuff (laughs). The subject matter, actually, is very political and it's amazing how much, especially when the Americans attacked Iraq, how much our story line began to follow that, even to the point of suicide bombers. [Ron Moore] did an interesting thing. He reversed the roles. The heros were the insurgents fighting against the Cylon attackers, which were essentially the American side of the Iraq war. And it's interesting because, if anything else, it opened up a lot of eyes as far as I was concerned, of everyone has a point in what they're doing, whether they're the insurgents or whether they're the attackers in the first place. I thought that was really good."