Moving On When Matt Drudge stops posting headlines in a red 36-point font, you can pretty much guess that a story is losing its juice.

No, it's not completely over, yet. But the frenzy that is Foleymania seems to have worn out even the MSM. What the longer-term impact will be on Nov. 7th is anyone's guess. But I have a feeling it won't be as significant as most people thought it would be back at the beginning of the week.

The key here is that the GOP leadership in the House has closed ranks behind Hastert. If they hadn't, then the new story sucking all of the media oxygen would have been the turmoil they were in - the finger-pointing, the second-guessing, the back-stabbing, leaked anonymous comments, etc. Once again, Republican candidates would have been knocked off message and the MSM would have been framing the debate on behalf of their Dem buddies.

I'm getting the sense that most people - those who even know the whole story - have gotten to the point where they are just sick of hearing about it.

I actually hope Democrats keep trying to make this an issue. Because it'll come across as petty and underscore yet again to undecided voters that they offer absolutely nothing beyond "we're not them".

With five weeks to go - a long time in politics - the GOP's next step is to get back to the three issues that drive their base: fighting terrorism, protecting tax cuts from expiring and appointing judges.

And, oh by the way, if they don't than you could be looking at this: 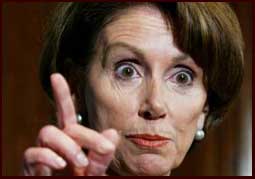 2 The left wingers had an organism over this, so maybe they ran out of spit and self help pills. Or As the old saying goes 'they were running a whorehouse by hand until they ran out of spit and burned up a D*** '. That closed them down. Hope this isn't too dirty for the teens that were, (but no longer are according to the democrats) capable of making their own decisions.

4 No it isn't over yet. The issue will be kept alive because of its repugnance to the republican base. The 2004 election was decided by 60,000 votes in one state, Ohio. The gay marriage referendem on that ballot carried the state for Bush. If dudes kissing won that election for Bush gay Reps chasing page boys down the halls of Congress could be the trump wimnner of 2006