Jaded Voters Yawn Over Abramoff Scandal Democrats are all juiced up over the idea that American voters will revolt against the GOP in November. And while, honestly, voters should be pissed off at the current system and how it affects both parties their expectations are that neither party holds a monopoly on honesty and integrity. The system needs to be reformed and the only chance of that is if the GOP makes it a priority to do so. Electing Rep. John Shadegg as the new House Majority Leader would be a good start.

But as far as the election goes, Rasmussen polls show a high level of apathy when asked about the current stories about lobbyists like Jack Abramoff.

Just 15% of Americans believe Abramoff did anything different than what lobbyists typically do. Forty-seven percent (47%) say Abramoff's actions were the norm while 38% are not sure.

A slight majority of Americans (52%) believe the Abramoff scandal involves members of both parties in Congress. Seventeen percent (17%) say it involves Republicans while 5% say it involves Democrats.

As an election issue, people say that political corruption in important, but they don't see a clear solution. Just 31% believe there will be less corruption if Democrats win control of Congress. That figure is offset by 24% who say there will be more corruption with Democrats in power. A plurality (39%) say nothing much would change.

As you would expect, there are tremendous partisan differences on responses to that question. Among those who are not affiliated with either major party, 49% say corruption would remain about the same if the Democrats are put in charge.

The Dems are making Congressional corruption a focal point of their campaign this year. But the reality is that the current set-up allows for an incumbency protection racket. A mere handful of Congressional seats are even remotely considered competitive. Paul Jacob has a column in TownHall.com today that looks at the problem.

You see, incumbents have voted themselves so many advantages that voters wind up with almost no viable alternatives. Most political observers are familiar with the litany of freebies to which incumbents take advantage: radio and TV studios used to beam messages back home, mass mailings to voters. But the real advantage incumbents in Congress have is power. A large part of that power is the trillions of dollars they spend, some in slices of pork they can send back home, and for which they take full credit.

But their power doesn't just stop there. Congress also has the power to regulate. Congress can make or break any business in America. Got a competitor? Congress has regulations! We're talking power that is worth trillions more. Good, negotiable power. So, is it surprising that interested parties would hire lobbyists to protect themselves or advance their own economic agenda?

There are a lot of Democrat voters who'd like to believe that their party holds the moral high-ground when it comes to integrity. The problem is there aren't nearly enough people that share this idealistic view to put Democrats back in charge. So instead of trying to find a reason for people not to vote for Republicans, they're only real hope is to try to come up with reasons to vote for Democrats.

Which means they have no hope. 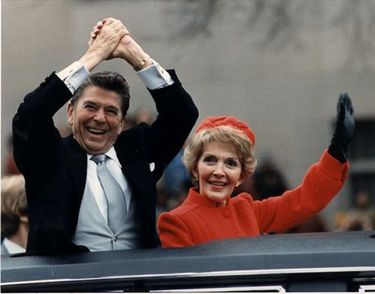 That day represented the high-water mark of Democrat control in Washington, D.C. For Democrats, it all went down hill from there. It was a gradual process, granted. And power shifted back and forth for a while, ebbing and flowing until 1994 when the GOP firmly took over both chambers of Congress.

During those twenty-five years, a shift occurred among the American electorate. Conservative ideas were listened to and, in many cases, accepted. The editors of OpinionJournal.com take a look this morning at the lasting effect of the ideas once derided as "Reaganomics" that have since been vindicated by a quarter century of evidence.

The Gipper's critics have written an economic history of the 1990s that they portray as a repudiation of Reaganomics. In this telling--known as Rubinomics--the Clinton tax hikes of 1993 ended the budget deficit, which caused interest rates to fall, which produced the boom of the mid- to late-1990s. In fact, the budget deficit hardly fell at all in the immediate aftermath of the tax hike, and while long-term interest rates fell in 1993, they shot back up again in 1994 almost precisely through Election Day (rising by some 230 basis points from October 1993 to November 1994).

On that day, voters repudiated the Clinton tax hikes and the specter of HillaryCare and gave Republicans control of Capitol Hill to govern on the Reaganite agenda of lowering taxes and shrinking runaway government. Both the stock and bond markets turned upward precisely on Election Day in 1994, beginning a whirlwind six-year rally. By 1998, growth and fiscal restraint delivered a budget surplus for the first time in nearly 30 years. In 1997 President Clinton signed a further reduction in the capital gains tax, which propelled investment and the stock market to even greater heights.

The latest chapter of this story is the 2003 income and investment tax cuts enacted by the current President Bush. As in 1981, opponents insisted those tax cuts would harm the economy by increasing the deficit and driving up interest rates. But in the two and a half years since those tax cuts passed, the economy and tax revenues have both surged.

Where Republicans have most strayed from the Reagan vision has been on controlling federal spending. But most still adhere to his tax-cutting lessons, with a few prominent exceptions (notably Senator John McCain). They should all recall the Gipper's words in his inauguration speech 25 years ago: "It is no coincidence that our present troubles parallel and are proportionate to the intervention and intrusion in our lives that result from unnecessary and excessive growth of government."

It's time for Republicans in Congress to celebrate this anniversary by embracing reform and turning the tide on the growing Leviathan that is the Federal Government.