Today In History The last great Democrat, John Fitzgerald Kennedy, was cut down in his prime. And at a time when his country needed him the most. 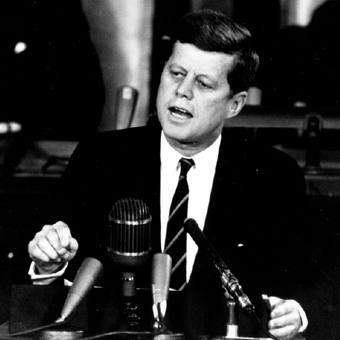 Not long after this tragedy, the Democrat Party began a long slide into Left-wing kookery. In the forty-two years that followed, only two men from that party were elected President. And in both cases, they were Southerners pretending to be moderates. Well, you know what they say. Fool me once, shame on you. Fool me twice, shame on me. I think it highly unlikely that the third time is the charm. In 2008, especially within the context of the Global War On Terror, the American voter is probably going to express their feelings in the booth: Won't Get Fooled Again.

I was raised in a Democrat household and taught to believe that Republicans were the enemy. It took me a long time to get past that. These days when I see Democrat Senators taking the floor and denouncing the mission that our brave men and women overseas are sacrificing everything for, just to try and gain some political traction, I can see who the enemy really is.

Just read (and listen to) the words of JFK:

"Let every nation know, whether it wishes us well or ill, that we shall pay any price, bear any burden, meet any hardship, support any friend, oppose any foe to assure the survival and the success of liberty."

Words like Freedom and Liberty and the idea of America being a beacon to the oppressed peoples of the world were not politically incorrect back then.

What the F**K happened to the Democratic party that I once proudly belonged to? What the hell has become of the party of Kennedy, Truman and FDR? They have been taken over by people who belong to the a generation that followed Kennedy. By a bunch of self-centered, narcissistic, spoiled assholes who were given everything and have given back nothing. By a bunch of pricks who lived their lives focused on getting high and getting off with no sense of personal responsibility.

I don't mean to paint this whole generation with a broad stroke. There are plenty among them who served their country, who hold dearly the principles on which this country was founded and who raised their children to appreciate the value of the freedoms we all take so much for granted.

But while the men and women whose life experiences were formed by the era of WWII can be easily regarded as "the Greatest Generation", I dare say that many of their children have tainted their own age-cohorts as "the Worst Generation". These are the people that are trying to run our country into the ground because while they love the idea of their country, they hate it the way it is. They blame America for all the misfortunes in the world and believe that any attack we receive is one that we brought upon ourselves. Fortunately, there are enough of them who understand all too clearly the enemy we now face.

If John F. Kennedy were alive today, he would be even more ashamed of his pathetic little brother than he was before his assassination.

I know there are people out there who are still registered as Democrats, but who more and more find themselves disagreeing with their party. They hold on to the hope that they might one day reclaim control of a party that has gotten out of control. I truly believe they are fooling themselves.

Jack's words of so many years ago still ring true for many of us - Democrat, Republican and Independent:

In the long history of the world, only a few generations have been granted the role of defending freedom in its hour of maximum danger. I do not shrink from this responsibility--I welcome it. I do not believe that any of us would exchange places with any other people or any other generation. The energy, the faith, the devotion which we bring to this endeavor will light our country and all who serve it--and the glow from that fire can truly light the world.

But for the leadership of the Democrat party, those words are nothing more than a hollow ideal of an age long past. They live in their own alternative reality where the next election is more important than the safety and security of the American people. They disgust me.

Forty-two years ago, more than a President died. A political party contracted a terminal illness, and they are currently in the last stages of the disease. For the sake of the nation, the sooner that it takes the final exit the better.

1 Man, I'm glad I clicked on this link today! My favorite excerpt from a JFK speech is from one he wasn't given a chance to deliver, 42 years ago today: "...America today is stronger than ever before. Our adversaries have not abandoned their ambitions, our dangers have not diminished, our vigilance cannot be relaxed. But now we have the military, the scientific, and the economic strength to do whatever must be done for the preservation and promotion of freedom. "That strength will never be used in pursuit of aggressive ambitions--it will always be used in pursuit of peace. It will never be used to promote provocations--it will always be used to promote the peaceful settlement of disputes. "We in this country, in this generation, are--by destiny rather than choice--the watchmen on the walls of world freedom." He understood.

3 My father considers Truman the last "true" Democratic President, but only because JFK never saw the end to a full term.

5 Wonderful post, Gary, and so true. It's too bad so many Dems have lost sight of Kennedy's vision. Despite his flaws he was a true American patriot--yes, I said the word.

6 Well said! Something has to change here. Having the Democrats be so out of touch hurts all Americans. Without realistic opposition, Republicans don't have to do what we elected them to do (cut spending, secure borders, etc) because we have absolutely no choice but to re-elect them. Someone's gotta fix those darn Democrats.