Dick Morris On Dems: "Pitiful" He may have no scruples, but he's pretty sharp as a political analyst. And what he sees so far tells him that the 110th Congress will be pretty much a yawn-fest.

Where the Republican majority best resembled the Prussian Army - disciplined, unified and determined - the Democratic majority in the upcoming Congress is disunited, dispersed and divided into myriad caucuses and special interest groups. One could purchase the Republican majority wholesale by making a deal with the speaker and the majority leader. But to get the Democratic majority in line, one has to buy it retail -- caucus by caucus.

First, one has to go to check with the Black Caucus -- hat in hand -- to see if one's bill has enough liberal giveaways to round up its forty or so votes. Thence to the Hispanic Caucus for a similar screening. Then, with one's legislation weighted down with liberal provisions added by these two groups, one has to sell it to the Democratic Leadership Council moderates and, even worse, to the Blue Dog Democrats -- the out and out conservatives.

If you are fortunate enough to pass these contradictory litmus tests, you then have to go to the environmentalists, the labor people, and even the gays to see that your bill passes muster. Only then can you begin to hope for House passage.

The result of this labyrinth is that the relatively moderate bill you first sought to pass ends up like a Christmas tree, laden with ornaments added to appease each of the caucuses. Unrecognizable in its final form, it heads to House passage.

Nancy Pelosi will face the same obstacle. By the time her legislation emerges from the lower chamber, it will bear little resemblance to what she had in mind, liberal as that might have been. As Clinton said, after he watched the mangling of his legislative program by the various caucuses in the House, "I didn't even recognize myself."

Once the highly amended liberal legislation emerges from the House, it will make easy fodder for a Senate filibuster. So left leaning that it stands no chance of attracting 60 votes, it will be dead-on-arrival.

For the sake of the country, I hope he's right. Apparently the "Blue Dogs" will be a particular force to be reckoned with. And as a block of 44 votes in the House, it'll be damn near impossible for Pelosi to push anything near and dear to the moonbat brigade. And this can only mean one thing: war between them and the nutroots.

The comedy show has already started. You will need several bags of popcorn since you don't want to miss a minute of it.

Liars: Dems Break Oft-Repeated Campaign Pledge And they haven't even officially taken over yet. Independents who voted to give them a chance at running Congress are beginning to learn what so many of us already knew - Democrat's were full of crap (to borrow Murtha's word).

It was a solemn pledge, repeated by Democratic leaders and candidates over and over: If elected to the majority in Congress, Democrats would implement all of the recommendations of the bipartisan commission that examined the attacks of Sept. 11, 2001.

But with control of Congress now secured, Democratic leaders have decided for now against implementing the one measure that would affect them most directly: a wholesale reorganization of Congress to improve oversight and funding of the nation's intelligence agencies. Instead, Democratic leaders may create a panel to look at the issue and produce recommendations, according to congressional aides and lawmakers.

Because plans for implementing the commission's recommendations are still fluid, Democratic officials would not speak for the record. But aides on the House and Senate appropriations, armed services and intelligence committees confirmed this week that a reorganization of Congress would not be part of the package of homeland-security changes up for passage in the "first 100 hours" of the Democratic Congress.

And it's not like they even had that many campaign promises. They basically ran on "vote for us, we're not them". In the coming weeks and months we should be finding out about more serious concerns - the pledges that they didn't campaign on but made to their special interest group supporters.

People should take note of the reforms that the Democrats wish to pursue in this next session of Congress. They want to clear out the Republicans from the levers of power, but offered John Murtha for Majority Leader, along with his pork-barrel extortive politics and the legacy of Abscam. They promised a tough and competent effort on national security, but offered a disgraced and impeached former judge to run the Intelligence Committee. Democrats pledged to take immediate action on all of the Commission's recommendations, but they will balk at any meaningful reform that limits the power of their master appropriators, including Murtha himself.

In other words, the Democrats plan on using Intelligence budgets the same way that both parties have used them in the past: as a means to perform favors for powerful friends. Those who believed they voted for change in the midterms might find themselves vindicated; it looks like Congress will change for the worse, and in record time at that.


At least Pelosi and Co. can say they were for the recommendations before they were against them.

1 WOW! What a shock. Who'd have see THIS coming!

The Battle Of Hastings Is Over Sorry, Alcee.

"I have been informed by the speaker-elect that I will not serve as the chairman of the House Permanent Select Committee on Intelligence in the 110th Congress," he said. "I am obviously disappointed with this decision." Hastings won election to Congress in 1992, after having been impeached and removed from office as a federal judge. He concluded his statement by saying, "Sorry, haters, God is not finished with me yet."

And the money shot to this fiasco:

OK, admit it. You were all thinking it, weren't you? Now it's been said, and by a Liberal no less. I hope this sticks.

UPDATE:
Don't Go Into The Light has a great photoshop on this topic. Go see it here.

And if it does stick, I'm stealing it!

UPDATE:
When a Liberal Democrat loses the NY Times Editorial Board, that says a lot.

Carville said the other Democratic campaign committees had borrowed to the hilt.

He said he tried to meet with Dean to argue for additional spending for Democrats in the final days of the campaign, but Dean declined and gave no reason why.

Asked by a reporter whether Dean should be dumped, Carville replied, Â“In a word, do I think? Yes.Â”

He added, Â“I think he should be held accountable.Â” He added, Â“I would describe his leadership as Rumsfeldian in its competence.Â”

Carville likened the Democratic takeover of Congress to the civil war battle at Gettysburg, which the Union army won but failed to pursue the Confederate army when it retreated.

Â“We should have chased them down,Â” Carville said. There was no immediate response from Dean or the DNC.

Oh, I can't wait to hear Dean's response, assuming he's man enough to respond at all. 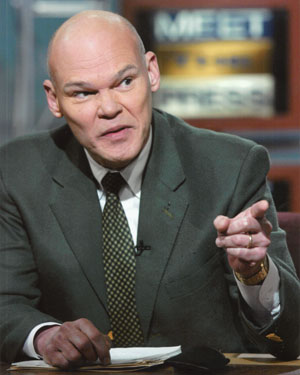 You want a piece of me, you Birkenstock-wearin' Lefty punk?!?

C'mon you nutroots folks! Don't you think it's about time you rode Carville out of town on a rail? I mean, comparing Howard Dean to Union General George G. Meade? That's an insult!

Draining The (Democrat) Swamp Uh, oh. Looks like Jack Abramoff has the dirt on some Senate Dems, including Dingy Harry.

San Fran Nan Backs Okinawa Jack For Majority Leader Wow. It didn't take long, did it? Moonbat pressure being applied or has the mask slipped? 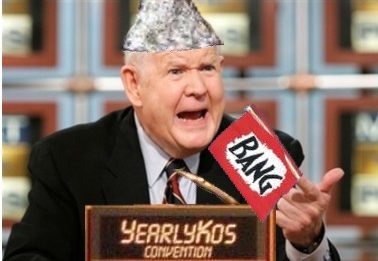 Once again, the Dem leadership thinks that just because you have military service on your resume that you have some kind of moral authority that cannot be questioned. I mean, there's no reason that America should be concerned (or the terrorists encouraged) that Democrats may not have what it takes to handle national security...is there?

If Murtha wins, so does the GOP. But the country loses. Big time.

The Dems' First Big Opportunity Germany has brought a lawsuit against outgoing SecDef Donald Rumsfeld for "war crimes" at Abu Ghraib. That's a good one.

Memo to Howard Dean: You need to understand that a trial against Rumsfeld is a trial against the United States. You want to weaken the United States in the tradition of Jimmah Carter? Go ahead and offer the human sacrifice. But keep in mind that this is your big chance to ensure that you keep your majority. Tell this ungrateful "ally" in no uncertain terms to suck your balls. That is, if you can find them.

The country is watching.

1 This is the Dem's first opportunity to show the country that they, in fact, have no balls.

2 Germany did not bring the suit. American leftists brought the suit, and brought it to Germany because German courts claim to pertain to the entire earth.

3 German courts can throw out the suit. If they don't than I'd say the final withdrawal of every one of our troops from German soil is overdue. We rebuilt that country sixty years ago. Perhaps that wasn't such a good idea.

4 So a country that has absolutely no relationship or jurisdiction over the locale in which these events were supposed to be taking place is levying charges against an individual for things that may or may not have happened, and may or may not have been the actions of vigilante morons, not operating under official sanction or orders? Yeah, that makes sense.

"Could Karl Rove have dreamed up a better October surprise than having the Democrats' most recent choice for Commander in Chief suggest that the men and women are dying [in Iraq] because they weren't smart enough to get into law school?"
- Karen Tumulty
Time Magazine
10/31/06

John Kerry's attitude toward the military is locked in a template formed by Vietnam, and one that is shared by so many elitist Liberals. For them, military service is either a line item you use to pad your political resume or something that's only for suckers who can't get out of it, like jury duty.

1 It was a nice October surprise for us. Yet another demonstration of what the DEms think of our beloved military.