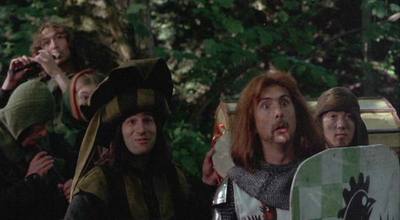 Moments before taping was to begin with host Tim Russert, Mehlman asked Dean outside the NBC studios green room: Theres still time for us to go on together Governor. Dean declined with a shrug of his shoulders and an uncomfortable cackle and then proceeded to walk away into the green room.

DRUDGE has learned MEET THE PRESS producers have been working to get a head to head Dean/Mehlman appearance on the program since Dean was named chair back in February. Dean and his handlers have repeatedly turned down the request. The former Vermont governor only agreed to do this weeks program if they appeared in back-to-back interviews.

Geez, even Terry McAuliffe had the balls to actually debate his RNC counterparts.

But then what would Dean do if all his bullshit accusations against the President were confronted with the facts. He'd probably have a similar reaction to that of the real Sir Robin when he was asked at the Bridge of Death, "What...is the capital of Assyria?"

He'd bluster, turn red and pop a vein in his head shouting "I don't know THAT!! AAAARRRRRGGGHHHH!".

As Dean left the studio, one of his handlers was overhead singing after him:


Brave Sir Robin ran away.
Bravely ran away away....
When Danger reared its ugly head,
He bravely turned his tail and fled
Yes brave Sir Robin turned about
And gallantly chickened out...