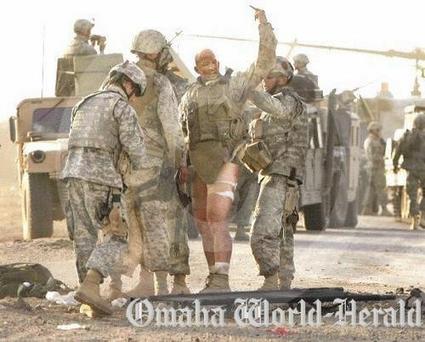 This is the story behind the photo:

Leading the fight is Gunnery Sgt Michael Burghardt, known as "Iron Mike" or just "Gunny". He is on his third tour in Iraq. He had become a legend in the bomb disposal world after winning the Bronze Star for disabling 64 IEDs and destroying 1,548 pieces of ordnance during his second tour. Then, on September 19, he got blown up. He had arrived at a chaotic scene after a bomb had killed four US soldiers. He chose not to wear the bulky bomb protection suit. "You can't react to any sniper fire and you get tunnel-vision," he explains. So, protected by just a helmet and standard-issue flak jacket, he began what bomb disposal officers term "the longest walk", stepping gingerly into a 5ft deep and 8ft wide crater. The earth shifted slightly and he saw a Senao base station with a wire leading from it. He cut the wire and used his 7in knife to probe the ground. "I found a piece of red detonating cord between my legs," he says. "That's when I knew I was screwed."

Realizing he had been sucked into a trap, Sgt Burghardt, 35, yelled at everyone to stay back. At that moment, an insurgent, probably watching through binoculars, pressed a button on his mobile phone to detonate the secondary device below the sergeant's feet. "A chill went up the back of my neck and then the bomb exploded," he recalls. "As I was in the air I remember thinking, 'I don't believe they got me.' I was just ticked off they were able to do it. Then I was lying on the road, not able to feel anything from the waist down."

His colleagues cut off his trousers to see how badly he was hurt. None could believe his legs were still there. "My dad's a Vietnam vet who's paralyzed from the waist down," says Sgt Burghardt. "I was lying there thinking I didn't want to be in a wheelchair next to my dad and for him to see me like that. They started to cut away my pants and I felt a real sharp pain and blood trickling down. Then I wiggled my toes and I thought, 'Good, I'm in business.' As a stretcher was brought over, adrenaline and anger kicked in. "I decided to walk to the helicopter. I wasn't going to let my team-mates see me being carried away on a stretcher." He stood and gave the insurgents who had blown him up a one-fingered salute. "I flipped them one. It was like, 'OK, I lost that round but I'll be back next week'."

Copies of a photograph depicting his defiance, taken by Jeff Bundy for the Omaha World-Herald, adorn the walls of homes across America and that of Col John Gronski, the brigade commander in Ramadi, who has hailed the image as an exemplar of the warrior spirit. Sgt Burghardt's injuries Â— burns and wounds to his legs and buttocks Â— kept him off duty for nearly a month and could have earned him a ticket home. But, like his father Â— who was awarded a Bronze Star and three Purple Hearts for being wounded in action in Vietnam Â— he stayed in Ramadi to engage in the battle against insurgents who are forever coming up with more ingenious ways of killing Americans.

Now that is how I define defiance. This guy eats goat-humpers like Al-Zarquawi for breakfast! And there are tens of thousands of Michael Burghardts serving in Iraq right now - protecting your ass whether you like it or not. Think we're not winning? Think again.

I got this courtesy of an email from mfsil, and it's been fully vetted and authenticated by the Urband Legend-busting Snopes.com. Can I get a hearty "Boo-Yah!" for Gunny Burghardt or what?

I really would have liked it to have been worded, "hat tip, mfsil," but I'm just pleased to be recognized by the Academy... - Georgia Girl