Naive Dipshits Blame U.S./U.K. For Hostage Taking So four idealistic idiots get kidnapped while trying to "reason" with terrorists, and it's the American and British governments who are to blame?

Well, apparently that's the story that the Christian Peacemaker Teams organization is pushing.

"We are angry because what has happened to our teammates is the result of the actions of the U.S. and U.K. governments due to the illegal attack on Iraq and the continuing occupation and oppression of its people," Christian Peacemaker Teams said in a statement.

Um, no. It's because you freaking fools have no clue what kind of evil you are dealing with. Do you think these animals will think twice about beheading your friends simply because they act as useful idiots for their cause?

It's really a shame that these people have gotten themselves into this mess because of their own stupidity. It's a bigger shame that organization that they represent has no ability to comprehend the fact that kidnapping and killing hostages has less to do with American foreign policy than it has to do with the Islamofascists' desire to wipe out all "infidels". Having the word "Christian" in the name of their organization probably qualifies for an extra dozen virgins in the terrorists' minds.

These were probably the same idiots who volunteered to act as human shields for Saddam before we went in there. What the hell is wrong with these people?

This Is What We Are Fighting Islamofascist Bastards Attack U.S. Toy Giveway:

A suicide attacker steered a car packed with explosives toward U.S. soldiers giving away toys to children outside a hospital in central Iraq on Thursday, killing at least 31 people. Almost all of the victims were women and children, police said.

Anyone who can continue to naively delude themselves into thinking that 1) there is some kind of moral equivalence between America and these animals and 2) ignoring this threat will make us safer is so drunk on the Left-wing Kool-Aid that the brain damage is probably irreversible at this point.

A Picture Is Worth A 1,000 Words And Michael Yon posts a whole bunch of 'em in this photo essay from Iraq.

Freedom Is What We Are Fighting For Mr. Right brought my attention to a situation at a milblog called Grey Eagle, written by a female soldier serving in Iraq. Her site recently underwent an attack of rude and disgusting comments by a bunch of moonbat freaks as well as a malicious hacking that disabled her ability to post any encouraging messages to the troops.

Her retort to these scumbags is an important statement and should be read. Go visit here and show your support.

Back With A Vengeance The esteemed Dr. Rusty Schackleford has returned to The Jawa Report after being on hiatus for a couple of months. And he's rightly pissed:

"I'm back. Driven to blog by all this defeatest bullshit coming out of the Democrats' mouths. Administrations do not wage wars, nations do. So, yes, not supporting the war is the same as not supporting the nation you treasonous twits. We are at war, and the last time I checked the Democrats were a part of we. Until we win this war I will do my part. In the meantime: 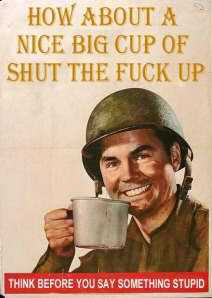 Welcome back Rusty! We missed ya.

"How Can I Help?" A question often asked by folks who want to pitch in with our Global War On Terror. I can understand that there are people who are not in favor of our current mission in Iraq but feel the tug of compassion enough to show their support for the Iraqi people.

Well, here's a perfect opportunity. Camp Katrina refers us to a drive to raise money for a wheelchair for "Kevin", an Iraqi translator who was crippled by a bomb while helping U.S. soldiers.

Instructions on how to make a donation for this cause is here. If you would like to make a real difference in the life of an Iraqi citizen who has made a tremendous sacrifice toward a better life for his people, I urge you to at least consider a fifty, twenty or even a ten dollar act of kindness for "Kevin".

Waiting 'Em Out In a post praising Senator John McCain's opposition to the ridiculous defense bill amendment passed by the Senate the other day, Betsy Newmark makes an excellent observation.

I teach a class on the American Revolution and the Civil War and we were just winding up our study of the Revolution yesterday with a contrafactual discussion of what would have happened if the French had not helped us at Yorktown. The consensus of the class is that Washington and the Americans would have continued their defensive-offensive tactics until British public opinion demanded an end to the war. I suspect that they are right. And remember, that by the second half of 1864 that that was the South's main hope in the Civil War. An exhausted public is one of the main advantages that a weaker power has in fighting a war. Think of Vietnam. The terrorists in Iraq have learned the lesson well that a democracy will only fight as long as the will of the people is behind the fight. So, they must weaken that will. The Senators voting for this amendment have just given them a victory.

And the moonbats on the Left, pounding away at the legitimacy of this mission, are doing a great disservice to our military who are trying to get the job done - whether they want to admit it or not.

"I am forced to conclude, on all the evidence, that Saddam poses a significant risk.

Some argue it would be totally irrational for Saddam Hussein to initiate an attack against the mainland United States, and they believe he would not do it. But if Saddam thought he could attack America through terrorist proxies and cover the trail back to Baghdad, he might not think it so irrational.

...At the end of the day, we cannot let the security of American citizens rest in the hands of someone whose track record gives us every reason to fear that he is prepared to use the weapons he has against his enemies."

Tom Maguire at Just One Minute has this and a fine collection of similar quotes from Rockefeller, Ted Kennedy and Nancy Pelosi.

You see Tom, unlike the stooges in the MSM, actually took the time to look it up.

1 What can they do. Fess up? The'll loose their base support, or so they imgaine. Then they will be less than zero. This is the Roman Senate in it's death throes.

2 This is the leftist insanity that plagues this nation. I wrote a post today about Clinton's guarantee on WMDs. The post is also very sarcastic about Bush "manipulating" Clinton's intelligence too. I hope you all can stop by.

Jordanians Revile Zarqawi Yesterday's bombings in Amman, Jordan did not go very far in winning over the hearts and minds of the Arab world:

Thousands of Jordanians rallied in the capital and other cities, shouting "Burn in hell, Abu Musab Zarqawi" a day after three deadly hotel bombings that killed at least 59 persons. Officials suspected Iraqi involvement in the attacks, which were claimed by al Qaeda's Iraq branch.

Protesters in Jordan and elsewhere in the Arab world denounced the Jordanian-born leader of al Qaeda in Iraq, Zarqawi.

If Zarqawi has a website, perhaps he should add this to his Amazon wishlist.