Climate Studies: A Lucrative Line Of Work Snake-oil comes in many forms but the people who peddle it are all after the same thing: a sucker's money. Take the current alarmist trend in climate studies, particularly the focus on "global warming" and its alleged relationship to the increase of man-made greenhouse gases. One of the major reasons it gets so much attention is the funding that it brings those who scream that the sky is falling.

In today's OpinionJournal.com, Richard Lindzen, an Alfred P. Sloan Professor at MIT, explains why this has become such a big deal:

"The answer has much to do with misunderstanding the science of climate, plus a willingness to debase climate science into a triangle of alarmism. Ambiguous scientific statements about climate are hyped by those with a vested interest in alarm, thus raising the political stakes for policy makers who provide funds for more science research to feed more alarm to increase the political stakes. After all, who puts money into science--whether for AIDS, or space, or climate--where there is nothing really alarming? Indeed, the success of climate alarmism can be counted in the increased federal spending on climate research from a few hundred million dollars pre-1990 to $1.7 billion today. It can also be seen in heightened spending on solar, wind, hydrogen, ethanol and clean coal technologies, as well as on other energy-investment decisions."

What's even more troubling, however, is the way those scientists who have the nerve to question all the current conventional wisdom suffer because of it. Sloan continues:

"But there is a more sinister side to this feeding frenzy. Scientists who dissent from the alarmism have seen their grant funds disappear, their work derided, and themselves libeled as industry stooges, scientific hacks or worse. Consequently, lies about climate change gain credence even when they fly in the face of the science that supposedly is their basis."

The Professor goes on to cite specific examples of this kind of thing. When you get this confluence of radical environmental groups, Left-wing politicians and academic advocates (with the MSM doing their marketing campaigns for them), you get a perfect storm that results in junk science becoming the generally accepted standard. And the biggest monetary prizes go to the ones who can sell the biggest panic to the policymakers and the taxpayers. As P.T. Barnum used to say, "there's a sucker born every minute".

footnote: Thanks to the anonymous commentor below for the clarification about the column's author.

1 The author is Richard Lindzen. As the Journal footnote states: "M. Lindzen is Alfred P. Sloan Professor of Atmospheric Science at MIT." Alfred P. Sloan was President of General Motors from 1923 until 1946, and Chairman of the Board until 1956. He died in 1966. There is no evidence he is currently on the faculty at MIT.

2 As it happens, there was an article on Drudge the other day accusing pharmaceutical companies of hyping bogus maladies in order to sell needless drugs. I'd be willing to bet a great many people read that and nodded in agreement. So why would it be any different here? The pharma boys may be in it for the money. In the world of gov'mint and academia, one also has to throw the prizes of power and prestige into the mix, but the incentive structure remains more or less the same.

3 Bet there are more men over the age of 35 taking Lipit0r than not. BTW, had to stick the zero in place of the 'o' because Mu.Nu recognizes it as a common spam word.

4 There is no evidence he is currently on the faculty at MIT. You mean other than MIT's website: http://www-eaps.mit.edu/faculty/lindzen.htm

"Global Warming" Stopped Eight Years Ago Funny how you don't here facts like this one amid all the hysteria about this "phenomenon": Average surface tempuratures of the earth did NOT rise between the years 1998-2005.

What? Yeah, that's right. Professor Bob Carter, a geologist at James Cook University in Queensland, Australia sifts through the fiction to bring you the facts in this piece he wrote for the UK Telegraph. Based on data collected by Climate Research Institute at the University of East Anglia, surface tempuratures have not risen higher than those recorded in 1998. Carter writes:

"In response to these facts, a global warming devotee will chuckle and say "how silly to judge climate change over such a short period". Yet in the next breath, the same person will assure you that the 28-year-long period of warming which occurred between 1970 and 1998 constitutes a dangerous (and man-made) warming. Tosh. Our devotee will also pass by the curious additional facts that a period of similar warming occurred between 1918 and 1940, well prior to the greatest phase of world industrialisation, and that cooling occurred between 1940 and 1965, at precisely the time that human emissions were increasing at their greatest rate.

Does something not strike you as odd here? That industrial carbon dioxide is not the primary cause of earth's recent decadal-scale temperature changes doesn't seem at all odd to many thousands of independent scientists. They have long appreciated - ever since the early 1990s, when the global warming bandwagon first started to roll behind the gravy train of the UN Inter-governmental Panel on Climate Change (IPCC) - that such short-term climate fluctuations are chiefly of natural origin. Yet the public appears to be largely convinced otherwise. How is this possible?

Since the early 1990s, the columns of many leading newspapers and magazines, worldwide, have carried an increasing stream of alarmist letters and articles on hypothetical, human-caused climate change. Each such alarmist article is larded with words such as 'if', 'might', 'could', 'probably', 'perhaps', 'expected', 'projected' or 'modelled' - and many involve such deep dreaming, or ignorance of scientific facts and principles, that they are akin to nonsense."

The issue is not whether or not surface tempuratures rise and fall in a cyclical pattern. They do. But the evidence that human activity in any way affects this has never really surfaced. It's only ever been "suggested". And if you suggest something enough times, people are going to accept it as a given. That's what we have here. The general acceptance that a theory is actually reality. Actually, the patterns described above fly in the face of the idea that industrialization correlates in any way with global warming or global cooling. Carter provides some perspective for those Chicken Littles who are unable to comprehend a world that existed before they were even born:

"Two simple graphs provide needed context, and exemplify the dynamic, fluctuating nature of climate change. The first is a temperature curve for the last six million years, which shows a three-million year period when it was several degrees warmer than today, followed by a three-million year cooling trend which was accompanied by an increase in the magnitude of the pervasive, higher frequency, cold and warm climate cycles. During the last three such warm (interglacial) periods, temperatures at high latitudes were as much as 5 degrees warmer than today's. The second graph shows the average global temperature over the last eight years, which has proved to be a period of stasis.

The essence of the issue is this. Climate changes naturally all the time, partly in predictable cycles, and partly in unpredictable shorter rhythms and rapid episodic shifts, some of the causes of which remain unknown. We are fortunate that our modern societies have developed during the last 10,000 years of benignly warm, interglacial climate. But for more than 90 per cent of the last two million years, the climate has been colder, and generally much colder, than today. The reality of the climate record is that a sudden natural cooling is far more to be feared, and will do infinitely more social and economic damage, than the late 20th century phase of gentle warming."

There are two powerful forces that push this junk science: the MSM and the Socialist-leaning Left. Neither wants to admit that nations like the United States that have a high industrial output created in a free-market economy results in the kind of high standard of living for its citizens that is the envy of the world. So any way they can try to reign in that kind of economic strength and drag it down to the mundane, mediocre, overtaxed and overregulated level of the rest of the "enlightened" nations of the planet, they'll do it.

And all the idealists around the world - and in this country - buy into the hype hook, line and sinker. And no matter what the data says, they can never be wrong. Because radical environmentalism is their religion. The opiate of the Liberal masses. If you are a non-believer, than you are a heretic and you must repent of your selfish, greedy, profligate and lazy ways. Next thing you know, they'll be handling snakes. Green ones.

1 About 30 years ago, scientists were trumpeting global cooling as the latest scare-mongering trend that would finish off the human race.

Real Life "Armageddon" Scenario Only with thirty years notice and, hopefully, no assistance from Ben Affleck.

Dear NASA: Get you asses in gear, please!

Be Skeptical, Be Very Skeptical Last week's cover of Time: 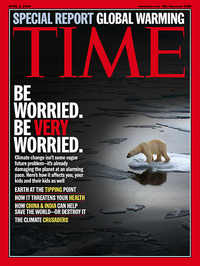 Scaring people must drive circulation up. What other reason would there be to waste time on an unproven theory? George Will reminds us that it was only about thirty years ago that these same "experts" had nothing but dire warnings for the coming Ice Age:

While worrying about Montana's receding glaciers, Schweitzer, who is 50, should also worry about the fact that when he was 20 he was told to be worried, very worried, about global cooling. Science magazine (Dec. 10, 1976) warned of "extensive Northern Hemisphere glaciation." Science Digest (February 1973) reported that "the world's climatologists are agreed" that we must "prepare for the next ice age." The Christian Science Monitor ("Warning: Earth's Climate is Changing Faster Than Even Experts Expect," Aug. 27, 1974) reported that glaciers "have begun to advance," "growing seasons in England and Scandinavia are getting shorter" and "the North Atlantic is cooling down about as fast as an ocean can cool." Newsweek agreed ("The Cooling World," April 28, 1975) that meteorologists "are almost unanimous" that catastrophic famines might result from the global cooling that the New York Times (Sept. 14, 1975) said "may mark the return to another ice age." The Times (May 21, 1975) also said "a major cooling of the climate is widely considered inevitable" now that it is "well established" that the Northern Hemisphere's climate "has been getting cooler since about 1950."

Are surface tempuratures rising by a percentage of a degree? Sure. But then the rising and falling of surface temperatures is a phenomenon that has been recorded since...well since they've been recording surface temperatures. That is an empirical and undeniable fact. Ten years from now we'll probably be back on the "global cooling" thing. And once again the "experts" will be saying it's our fault.

The forces of nature are mightier than anything humans can dish out. Until someone somewhere can come up with some undeniable proof that human activity is in any way linked to this natural process, I remain skeptical...very skeptical.