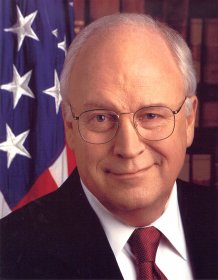 And many more, to the gob-smacking consternation of moonbats everywhere.

And to celebrate, head over to the Ace archives to read the thread "Cool Facts About Dick Cheney" (it's a long one)!

Have a great one, ya big lug!

1 Born in the same month of the same year. Guess it is correct, really smart people are born in Jan.

Why So Glum, Chum? Some perspective from Geraghty the Indispensible on "the Big Three" GOP Presidential candidates. Not really as bloody awful as some depressed Conservatives might think.

And for the record, Captain Ed asks "What's the rush?" I second that. I can't see jumping on any particular bandwagon this early in the process.

UPDATE:
Last minute thought. The fear and loathing of a Shrillary Presidency could be the single most significant factor in driving Republican turnout in 2008 for a candidate that the base isn't really that jacked-up about.

Um, not to be a dick or anything, but did anyone out there - until just now - realize that she was still there?

2 Hmmmm, seriously, I agree, I thought she'd moved to Bermuda.