The U.S. missile defense system includes 11 long-range interceptor missiles, including nine deployed at Fort Greeley, Alaska, and two at Vandenberg Air Force Base, Calif. The system was switched from test to operational mode within the past two weeks, the officials said.

One senior Bush administration official told The Washington Times that an option being considered would be to shoot down the Taepodong missile with responding interceptors.

Secretary of State Condoleezza Rice added that any launch would be a serious matter and "would be taken with utmost seriousness and indeed a provocative act."

Remember those douche bags who scoffed at missile defense? Remember those Left-wing nuclear-freeze idiots who derided it as "Star Wars" and called the research a waste of money (that could be better wasted on gubment handouts and pork projects)? Remember how they mocked Ronald Reagan and still do today, even though the Soviets admitted that his adherence to the program is what finally broke their system?

Well, thank God George W. Bush said "no" to the out-dated and useless ABM treaty and had SecDef Donald Rumsfeld put a plan in place to implement this program!

Rummy has issued a warning to that buck-toothed little twerp Kim Jong-Il: 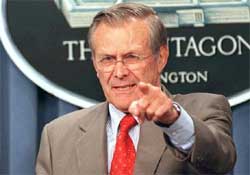 "Now witness the firepower of this fully ARMED and OPERATIONAL missile defense shield! Fire at will, Commander!"