When Global Warming was Cool (Or: "I'm too sexy for my MTV appearance") 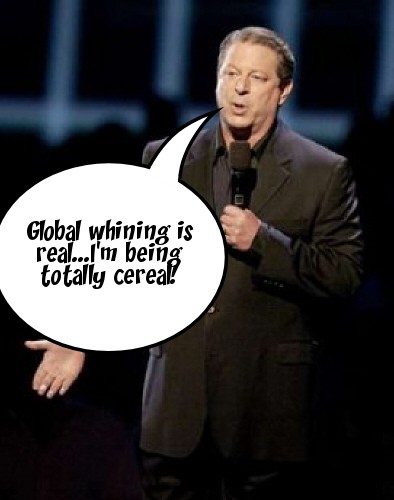 When an AP reporter disses your pontification at the MTV Video Music Awards and refers to you as a "wooden politician", you know it had to have been a big mistake:

They do NOT watch for lectures from former Vice President Al Gore on global warming. When does the phrase "here's a photo of a glacier melting" ever fit into an awards show?

Gore did get a laugh, however, when he intoned, "I actually was not intending to be here tonight, but then MTV explained that Justin Timberlake was bringing sexy back."

*Blech!* Okay....we have Big Sexy in the house, dressed like the man in black, ultra hip, suave, and solid, giving the MTV audience (which his wife Tipper went on a jihad against years ago) the time of their life with................his inane slide show.

See it for yourself if you missed it (like I had when it aired Aug 31st):

And I never did blog on this, but here it is if you missed it...another example of liberal hypocrisy at its finest, from USA Today: 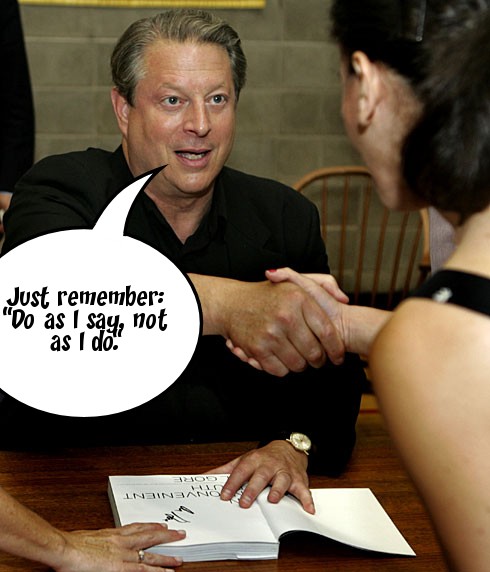 For someone who says the sky is falling, he does very little. He says he recycles and drives a hybrid. And he claims he uses renewable energy credits to offset the pollution he produces when using a private jet to promote his film. (In reality, Paramount Classics, the film's distributor, pays this.)

Public records reveal that as Gore lectures Americans on excessive consumption, he and his wife Tipper live in two properties: a 10,000-square-foot, 20-room, eight-bathroom home in Nashville, and a 4,000-square-foot home in Arlington, Va. (He also has a third home in Carthage, Tenn.) For someone rallying the planet to pursue a path of extreme personal sacrifice, Gore requires little from himself.

Then there is the troubling matter of his energy use. In the Washington, D.C., area, utility companies offer wind energy as an alternative to traditional energy. In Nashville, similar programs exist. Utility customers must simply pay a few extra pennies per kilowatt hour, and they can continue living their carbon-neutral lifestyles knowing that they are supporting wind energy. Plenty of businesses and institutions have signed up. Even the Bush administration is using green energy for some federal office buildings, as are thousands of area residents.

But according to public records, there is no evidence that Gore has signed up to use green energy in either of his large residences. When contacted Wednesday, Gore's office confirmed as much but said the Gores were looking into making the switch at both homes. Talk about inconvenient truths.

Gore is not alone. Democratic National Committee Chairman Howard Dean has said, "Global warming is happening, and it threatens our very existence." The DNC website applauds the fact that Gore has "tried to move people to act." Yet, astoundingly, Gore's persuasive powers have failed to convince his own party: The DNC has not signed up to pay an additional two pennies a kilowatt hour to go green. For that matter, neither has the Republican National Committee.

Gore has held these apocalyptic views about the environment for some time. So why, then, didn't Gore dump his family's large stock holdings in Occidental (Oxy) Petroleum? As executor of his family's trust, over the years Gore has controlled hundreds of thousands of dollars in Oxy stock. Oxy has been mired in controversy over oil drilling in ecologically sensitive areas.

Living carbon-neutral apparently doesn't mean living oil-stock free. Nor does it necessarily mean giving up a mining royalty either.

Humanity might be "sitting on a ticking time bomb," but Gore's home in Carthage is sitting on a zinc mine. Gore receives $20,000 a year in royalties from Pasminco Zinc, which operates a zinc concession on his property. Tennessee has cited the company for adding large quantities of barium, iron and zinc to the nearby Caney Fork River.

The issue here is not simply Gore's hypocrisy; it's a question of credibility. If he genuinely believes the apocalyptic vision he has put forth and calls for radical changes in the way other people live, why hasn't he made any radical change in his life? Giving up the zinc mine or one of his homes is not asking much, given that he wants the rest of us to radically change our lives.

The writer is Peter Schweizer, author of Do As I Say (Not As I Do): Profiles in Liberal Hypocrisy.

It's high time Al Gore cooled it with his excessive CO2 emissions. Maybe he could hold his breath, once in a while?

2 Let's see: Al Gore flunked out of divinity school. He playing the demagogue, inciting hatred of Republicans and demonizing all who disagree with him. Seems like he wants to be a modern, left-wing version of Father Coughlin. But he doesn't have enough personality to pull it off. (Hmmm, the energizer demagogue?)

3 Yawn. Focus on the message, not the messenger, dipstick.

4 The message is actually more amusing than the messenger. Now go adjust your tinfoil hat.