English Only The Senate has passed a provision making English the official "national language" of the United States.

I think the Congress is aiming too low here. I'm all for passing a law making English the official "international language" of planet Earth.

Hey, it would have at least as much validity as any other bogus unenforceable "international" law. So why not? 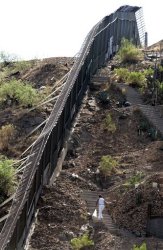 The Danger Of Absolutism Well, the President gave the speech. I didn't see it. We were trying to quickly and efficiently get my kids ready for bed so that the Mrs. would be able to sit down at 9pm watch her much-anticipated season finale of "Grey's Anatomy" without distraction or interuption.

I haven't even read the text so I can't comment on it yet, but from what I understand there wasn't anything said that we haven't heard before. Like most everything else, the President has been consistent about what he sees as a compromise solution to this hot-button issue.

Some of the heavy-hitters on the Right side of the blogosphere, however, are - at best - not pleased and - at worst - enraged. That's to be expected. This is an emotional issue. But it's also a complex one that will not be solved without some sort of compromise. Dafydd at Big Lizards warns bloggers like John Hinderaker of Powerline:

For the love of God, people... compromise means you must give a little. There is a middle ground. And if I'm wrong, if there is not, then we are all lost -- because John's side does not have the support of the American people and will never win.

Here are our choices:

1) We settle on a reasonable compromise bill that includes both border enforcement and also immigration reform, a guest-worker program, and some eventual normalization; and we try to make it the best bill we can, given those constraints; or...

2) We rend the party, the Democrats win, and then you'll find out what "amnesty" and "open borders" really mean. And minor things like the entire war on jihadi terrorism will trampled underfoot by the Democratic thugs who seize control of our country.

And all for the want of the simple art of giving a little to get a lot.

Think. Think. Think two times, three times... and don't throw away this magnificent opportunity -- just because you only get three-quarters of a loaf instead of the whole bloody thing on a golden plate. [emphasis his]

Hugh Hewitt points out that the White House has its work cut out for them:

Memo to Tony Snow: The blogosphere/talk radio callers/e-mailers are turning against this speech in a decisive fashion. They simply do not believe the Administration is really committed to border enforcement, and the spokespeople sent out to back up the president's message aren't doing that job. Period.

Let's take a breath here. At the risk of sounding like (a parody of) another President Bush - overreaction "would't be prudent...at this juncture".

UPDATE: 9:15am
AJ Strata has an extensive list of "thank you"s to the President in response to those in the base who are asking "what have you done for me, lately?".

Put Down The Chalupa...And Walk Away Expect a run on your local Taco Bell soon. 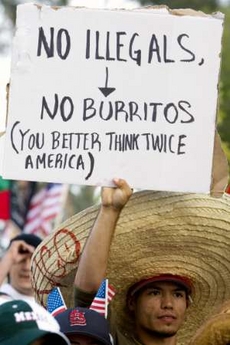 note: this was not photoshopped

2 Phew! If he would have held up a sign about no enchiladas, I would have broken out in a panic, and would have to do some serious soul-searching on where my loyalties stand.

3 Just stumbled here by link. This is the funniest blog name I've ever seen. I thought burritos were invented in San Fransisco.(CA.)