Lower Tax Rates = Higher Tax Receipts Not that I'm at all surprised, but once again what Democrats love to campaign on as "tax cuts for the rich" has been proven to be the fuel that drives a hearty economy. Thank you President Bush. As the editors of the WSJ online explain:

The real news, and where the policy credit belongs, is with the 2003 tax cuts. They've succeeded even beyond Art Laffer's dreams, if that's possible. In the nine quarters preceding that cut on dividend and capital gains rates and in marginal income-tax rates, economic growth averaged an annual 1.1%. In the 12 quarters--three full years--since the tax cut passed, growth has averaged a remarkable 4%. Monetary policy has also fueled this expansion, but the tax cuts were perfectly targeted to improve the incentives to take risks among businesses shell-shocked by the dot-com collapse, 9/11 and Sarbanes-Oxley.

This growth in turn has produced a record flood of tax revenues, just as the most ebullient supply-siders predicted. In the first nine months of fiscal 2006, tax revenues have climbed by $206 billion, or nearly 13%. As the Congressional Budget Office recently noted, "That increase represents the second-highest rate of growth for that nine-month period in the past 25 years"--exceeded only by the year before. For all of fiscal 2005, revenues rose by $274 billion, or 15%. We should add that CBO itself failed to anticipate this revenue boom, as the nearby table shows. [see below] Maybe its economists should rethink their models.

Remember the folks who said the tax cuts would "blow a hole in the deficit?" Well, revenues as a share of the economy are now expected to rise this year to 18.3%, slightly above the modern historical average of 18.2%. The remaining budget deficit of a little under $300 billion will be about 2.3% of GDP, which is smaller than in 17 of the previous 25 years. Throw in the surpluses rolling into the states, and the overall U.S. "fiscal deficit" is now economically trivial.

A picture (or graph) is worth a thousand words: 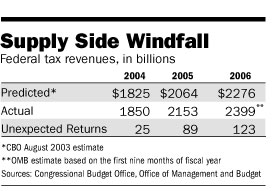 Sorry, Mr. Krugman, but your economic models are based on variables that exist only in the land of Liberal "make-believe". Tax cuts worked in the 1960's under Kennedy, in the 1980's under Reagan and now - third times the charm - they're paying dividends in the dawn of the 21st century under Dubya. I know Liberals love to "soak the rich". It's their chief economic mantra. I used to harbor that myopic mentality back when I was young and stupid. It made sense on an emotional level. Well, guess what? When you collect more tax revenue from the rich, you're soaking them more than you can imagine.

The same crowd that said the tax cuts wouldn't work, and predicted fiscal doom, are now harrumphing that the revenues reflect a windfall for "the rich." We suppose that's right if by rich they mean the millions of Americans moving into higher tax brackets because their paychecks are increasing.

Individual income tax payments are up 14.1% this year, and "nonwithheld" individual tax payments (reflecting capital gains, among other things) are up 20%. Because of the tax cuts, the still highly progressive U.S. tax code is soaking the rich. Since when do liberals object to a windfall for the government?

If Democrats are so convinced that the current tax code is still so unfair and that it will spell disaster in the future, why not call the GOP's bluff? Why not make the cuts that are due to expire in 2010 permanent? If the Republicans are wrong and the economy tanks because of the "crippling" deficit, it would be the perfect opportunity to win back BOTH houses of Congress and hike them back up. They won't do that because deep down they know that their class-warfare rhetoric is bullshit. If you make the cuts permanent, no one is going to elect someone who campaigns on raising them again.

But the Democrats wouldn't knowingly tank the economy for political gain, you say? Wrong. They would in a hearbeat. Just like they hope and pray for American failure in Iraq. What's bad for the country is good for them, politically. Or at least they'll do their damndest to try and make it that way.

1 Gary, Great post. You'd think the libs would be happy wouldn't you. More money for the government to spend, and in spite of a tax rate decrease, real taxes have gone up. So there were, in fact, no tax cuts for the wealthy! Sounds to me like its time for further tax cuts.