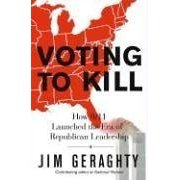 Painting The Map Red Go over to The Real Ugly American for an extensive review of Hugh Hewitt's new book, "Painting The Map Red". Rick incorporates part of an interview he had with Hewitt to examine what the GOP needs to do to increase its majority and break the 50/50 Electoral deadlock we've seen in the last two Presidential elections.

I own the book and it's next in line for me to read. This post makes me want to get to it faster!

What I'm Reading Now Over the last six months or so, I've been focused on blogging The Lord of the Rings over my other site: Tolkien Geek. It's a project that took me way longer than I expected. And it kept me from getting to a slew of other books that I've been wanting to read.

Now that it's pretty much done, I plan on hitting the ground running. And I'm starting with:

The New American Revolution, by Tammy Bruce
For a long time now, the Left has been pushing their Liberal agenda and Political Correctness down out throats, demanding that we sacrifice our individuality to their groupthink. Well, since Sept. 11, the rest of America is tired of it and we're not going to take it anymore! Bruce excoriates the Left (where she once resided) and explains how the nation is currently undergoing a "New American Revolution".

1 I finished 1776 recently. A very good book and an unflinching account of how Washington damn near lost the whole bloody thing on Long Island and Manhattan.

Tammy Bruce Interview If you're not familiar with best-selling author and radio personality Tammy Bruce, you should be. A self-decribed "pro-choice lesbian feminist", she currently has a book out called "The New American Revolution".

John Hawkins at Right Wing News interviewed her and the transcript is here. She has a fascinating analysis of the "hate-America first" Left based on her personal experiences. Tammy is considered by many to be a voice of the Right, but she started her political activism on the Left. Her personal philosophy, which emphasizes individualism and personal responsibility, became too incompatible with the "collectivist" mentality of American Liberalism. Upon reflection, she admits she's still not quite used to being labeled a Conservative:

"...itÂ’s still odd that IÂ’m now considered a conservative, but thatÂ’s because the left has gone so far to the left theyÂ’re fascists.

So someone like me is considered a conservative and it comes down to being willing to accept -- and IÂ’ve discussed labels in the book as well -- be willing to accept what youÂ’re called but also be clear for yourself about what you really are. In todayÂ’s day and age, I am a conservative, in the sense of what that stands for. TodayÂ’s conservative is yesterdayÂ’s classical liberal and IÂ’m determined to try to help make that label more popular, more broad, more accepted, and more understood and I hope IÂ’m doing a good job. "

The whole thing is definitely worth a read. Tammy's blog can be found here.

1 I remember last year pre-November 2nd- listening to Tammy Bruce as she guest-hosted for a radio personality one week. She had some really nice ways of putting things, that I wish I had recorded. In regards to describing herself as a classical liberal; and why she so supported this President and was estranged from other Democrats.

2 I love Tammy Bruce when a former head of NOW, feminist lesbian tells you that the left wing has gone whacko how can you argue?